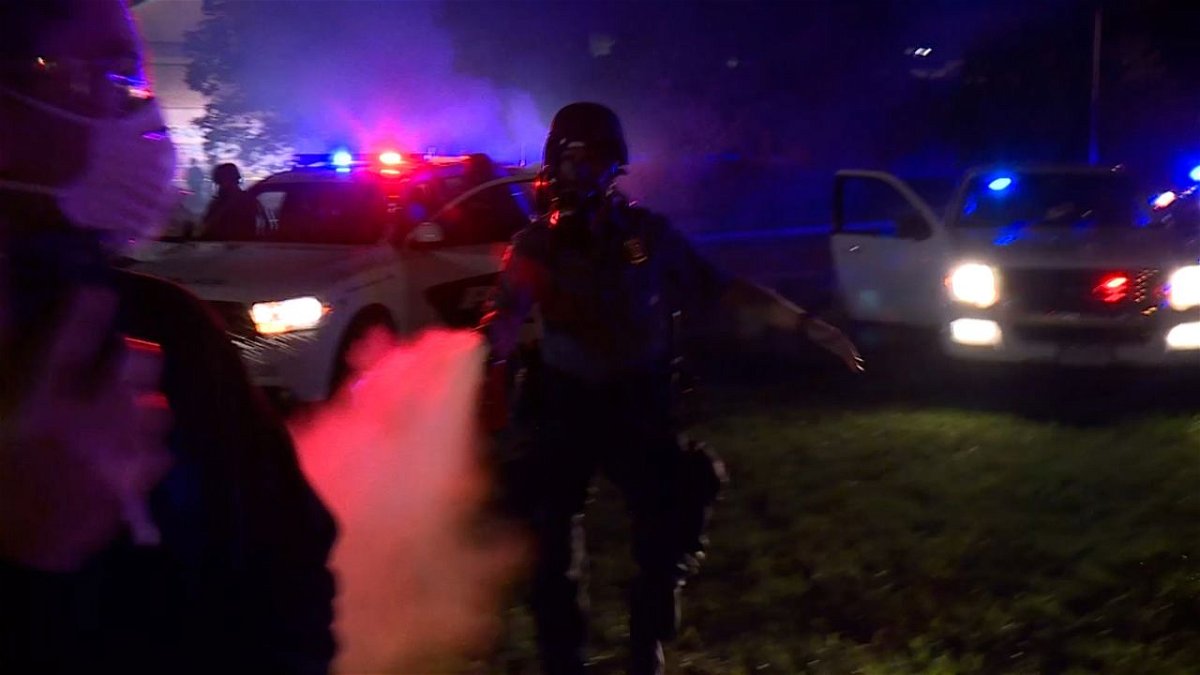 COLORADO SPRINGS, Colorado (KRDO) — 13 Investigations obtained video from the Colorado Springs police-worn camera capturing an unidentified individual chanting “we will, we will gas you” ahead of a highly controversial 2020 George Floyd protest.

“You’ve got blood on your face, you big shame, you’re kicking yourself all over the place. Singing we will, we will gas you,” the individual can be heard singing to the tune of the song. recognizable from Queen’s 1977 “We Will Rock You”.

Another person appears to be laughing at the altered lyrics, however, neither the singer nor the laughing individual are seen in video from the Colorado Springs police carried camera.

Body worn camera video was recorded June 2, 2020 prior to a protest outside the Colorado Springs Police Operations Center located in the 200 block of E. Rio Grande St.

Colorado Springs police say 13 Investigations there was a multi-jurisdictional police presence when this video was recorded and it is unclear who made these comments.

Four hours after the individual was recorded chanting “we’re gassing you”, law enforcement officers, including Colorado Springs police, used tear gas and pepper spray on protesters in the purpose of dispersing the crowd.

Video from the Colorado Springs Police body worn camera was provided to 13 Investigations by a civil rights lawyer representing a woman who recently filed a complaint against the city of Colorado Springs and four police officers.

Tara Hadam alleged that Colorado Springs police officers used excessive force and wrongfully arrested her during the June 2, 2020 protest outside the operations center.

“During the protest, Ms. Hadam demonstrated peacefully against police violence,” said an amended complaint filed in August. “Despite the peaceful nature of her protest, CSPD officers subjected Ms. Hadam to the completely unlawful violence she was protesting against. The video makes what happened indisputable: Ms. Hadam stood with her hands up in front of a line of CSPD officers in full riot gear and protective shields; as she stood, (the accused) repeatedly sprayed her directly in the face with extremely painful noxious chemical sprays.

Following the incident, Hadam was arrested and charged with obstructing a police officer and disobeying public order. However, after a jury trial, Hadam was acquitted of her charges in September 2021.

On September 28 of this year, members of the Colorado Springs City Council voted 7 to 2 to approve a six-figure settlement with Hadam.

Adam Frank, Hadam’s attorney who provided 13 Investigations with camera video carried by Colorado Springs police, says the settlement between his client and the city of Colorado Springs is worth approximately $140,000.

Frank says video from the Colorado Springs police-worn camera, recorded the same day as Hadam’s arrest, showing an individual chanting about the gassing of protesters was obtained during the discovery phase of Hadam’s civil case. his client with the Colorado Springs City Attorney’s Office.

The lawsuit goes on to allege that CSPD officers exclusively use violent force against Democratic, Black Lives Matter or left-wing protesters.

Frank says the “we’re going to gas you” video adds credence to that claim.

“Colorado Springs tried to argue that this was a problem of a few bad apples in an otherwise okay situation,” Frank said. 13 Investigations. “What we learned was that there was a top-down culture that said crush these protests. Without that culture, an officer doesn’t feel comfortable singing that. The other officers around him don’t feel comfortable laughing. This is not something that happens unless the culture of the department dictates from above that these protests are a problem and our job is to stop them.

In a statement to 13 Investigationsthe Colorado Springs Police Department says the short thirty-second clip does not accurately depict their officers’ thought process when it comes to dispersing tear gas.

Here is the full statement from the CSPD:

The CSPD is aware of the BWC recording and that it was shared with legal counsel as part of the civil discovery process. There was a multi-jurisdictional police presence when this video was recorded and it is unclear who made the comments. We acknowledge the perception this video shows, but note that it does not accurately show the thought process and considerations made by CSPD personnel before gas dispersal was authorized during the 2020 riots. of this video has already been deemed part of the dispute, CSPD is not taking any further action regarding the video.

This is not the first agreement between the city and a protester. In February, the city council settled another lawsuit against Celia Palmer.

Palmer was a Black Lives Matter protester the same day Hadam was arrested.

This lawsuit alleges that CSPD officer Keith Wrede “ambushed” Palmer, tackled her “for no reason” and arrested her “in a blatant attempt to cover up” excessive use of force against a another BLM protester.

This settlement agreement stipulated that by March 1, the City of Colorado Springs must include the following language in CSPD policies: