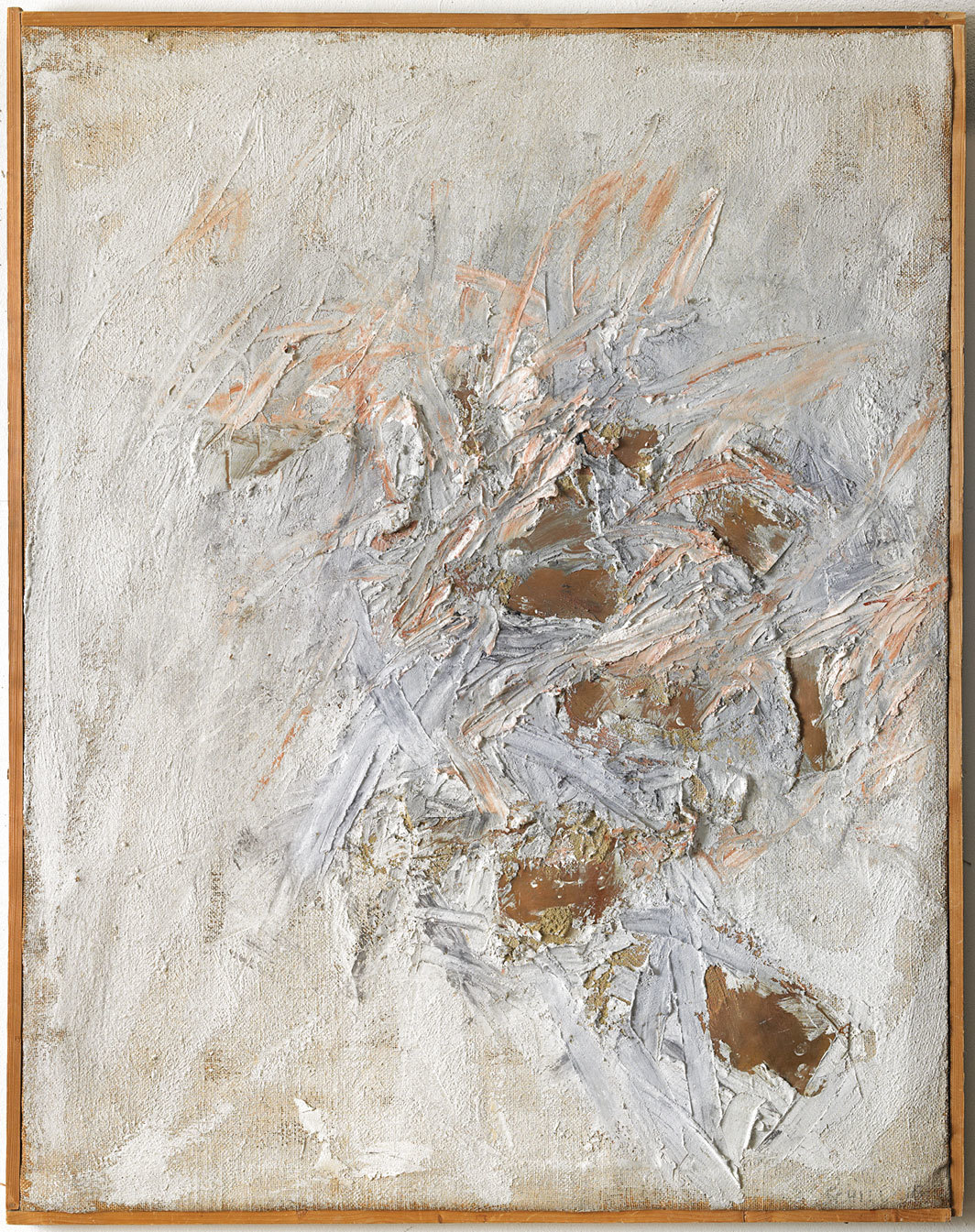 NEITHER GÜNTER BRUS NOR ALFONS SCHILLING were very good keepers of their early work, much of which is lost. For the financially well off Schilling, it was the consequence of a nomadic and adventurous lifestyle. From 1960 to 1964, the Swiss artist lived in Vienna and Paris, before settling in New York, although he continued to travel extensively, including stays in Mexico, Greece, Majorca and the mali. By contrast, the same period saw Brus mired in personal hardship, from his compulsory military service in Austria in 1961 to his discovery in 1964 only after a winter spent washing dishes and shining shoes to join the two ends, his most recent painting project had been piled up in the corner of a Viennese gallery and left to rot. In 1968, the year Schilling was in Chicago photographing protests at the Democratic National Convention, Brus was sentenced to six months in prison for his leading role in Kunst and Revolution (Art and Revolution), a raucous Actionist Happening at the University of Vienna that scandalized the Austrian public. To avoid imprisonment, the artist fled to West Berlin the following year, leaving behind much of what was left of his material practice.

Thus, for an exhibition like “Günter Brus and Alfons Schilling around 1960: Dropping Out of the Picture”, curator and brueum director Roman Grabner had to make a gap tangible. Grabner took up this daunting challenge, only including works produced between 1958 and 1964. The exhibition marked a fruitful collaboration between the bruseum, an offshoot of the Neue Galerie Graz in Austria, which housed the archives of Brus and many of his extant works. since 2011, and the Estate Alfons Schilling, founded in 2013 in Vienna. He took as his starting point the unlikely friendship that Brus and Schilling forged as painting students at the Academy of Fine Arts in Vienna in the late 1950s, as the two of them were in dialogue with informal art and abstract expressionist painting. Inspired, without ever explicitly referring to it, by Laszlo Glozer’s famous phrase “der Ausstieg aus dem Bild“(the output of the image) – invented for the exhibition”Westkunst: Zeit genössische Kunst seit 1939(Westkunst: Contemporary Art since 1939), which he organized alongside Kaspar König in Cologne in 1981 – Grabner proposed that every artist defiantly ‘give up’ or quit painting, around 1960. They did, however, in surprisingly different ways. For Brus, change would involve an introspective analysis of physical closeness and confinement; for Schilling, an exploration of optics and movement.

To flesh out his argument, Grabner drew from private and local collections a selection of works on paper by Brus, a number of which had never been exhibited publicly before. These drawings charted Brus’s startling early attempts to pictorially distill the implications of body and space – the ins and outs of bodily functioning within the openings and embrasures of his environment – that would become the hallmark of later performances. which he called “body analyses”. The most exciting galleries juxtaposed a handful of notable paintings by the two artists, offering insight into how their practices diverged even more sharply in the second half of the decade, as Brus became increasingly concerned with positioning the body in space and Schilling with vision technologies.

The first gallery showcased the artists’ respective understandings of the medium of painting, shaped by their varying access to materials. One wall was covered with twenty-five of Brus’s untitled sketches, whose abstract shapes suggested bulky rectangular blocks and what looked like flattened window lattices rendered in charcoal or pencil on paper. Although technically simple spatial studies, these drawings had occasional surface creases, rubbing, and punctures that indirectly record Brus’ quickening pace and increasing physical pressure. On adjacent and opposite walls were four voluminous paintings by Schilling, all untitled, which incorporated copper, slate, sand and jute on coarsely woven cotton canvas. With their strikingly contrasting materials, these works emphasized the manufacturing process; they invited the viewer to linger, to look at the varied textures and techniques from different angles. An untitled canvas from 1960 encased shards of slate in a globe of plaster against a background of white paint that bore muddy smudges of clawed fingers. The piece was signed in three corners, indicating Schilling’s early interest in the mobility of the artwork and the viewer’s strategic disorientation.

In one of the exhibition’s most compelling juxtapositions, a work by Brus tied to his immersive experience Malerei in einem labyrinthischen Raum (Painting in a Labyrinthine Room, 1963) hung near an untitled 1961 Schilling assemblage, a wire mesh window screen set in a wooden frame that had been splattered with dispersion paint. To create the first, Brus hung wrapping paper and cheap cotton canvas in a basement, then bound his arms and legs together to inhibit his own range of motion. Such conditions of constraint, evident in the dense paint roughly smothering the canvas, would also define his later performance practice. In contrast to the palpable claustrophobia evident in Brus’s painting, Schilling’s room, beautifully lit so as to cast intricate shadows with its wire mesh and dappled paint on the wall behind it, illustrates her growing interest in painting techniques. optical interference and mediation. After experimenting in Vienna with a manual rotating disc that set his canvases in motion while he painted them, the artist built in Paris a mechanical rotating device on which he could mount large circles of canvas or paper. He would then throw paint at them while they were spinning. The window piece can therefore be seen as his final, playful quotation of the painting’s traditional window frame – and the expectations of orientation and perspective associated with it.

In the final gallery, two of Schilling’s massive “spinning paintings” from 1962, both untitled, leaned precariously against a wall, facing a gridded installation of photographs of Brus’ first documented performance, Anne, 1964. Working with Estate Alfons Schilling, Grabner included Schilling’s rotating device and installed a third painting there. Museum staff could activate the device, transforming the object into a multi-sensory stimulant that is at once visually engulfing, acoustically grating and physically disorienting. The works produced on this device would be his last paintings; those that followed might earlier be classified as holography, stereoscopy, or what Schilling called “Sehmaschinen(vision devices). The photographs of AnneBrus’s first collaboration with Anni Steiner (his future wife), seemed Luddite in contrast, capturing a performance that strangely renewed, while displacing, one of painting’s oldest conventions: the true duel between figure and ground, body and space.

In their almost confrontational exit strategies “circa 1960”, Brus and Schilling figured as captivating if hesitant protagonists.

The title of the exhibition, which was also the title of the latter gallery, invited an intriguing art-historical conjecture, as Schilling was not included in Glozer’s work. Westkunst project. It was an idiosyncratic “exit” from the European canon, at least at the time. Brus, however, was included, albeit as a representative of “Viennese Actionism”, and thus affiliated (and subordinated) to the more aggressive Actionist tendencies of Hermann Nitsch and Otto Muehl. With its focus on the obscured early work of Brus and Schilling, the Graz exhibition charted new territory by highlighting their different attitudes towards the remnants of the pictorial space of painting. In their almost confrontational exit strategies “circa 1960”, Brus and Schilling figured as captivating if hesitant protagonists. How would this story continue? In 1966 Schilling was experimenting with lenticular photography in New York and was hired by Billy Klüver of Bell Telephone Laboratories to film 9 Evenings: Theater and Engineering, featuring performances by, among others, John Cage, Lucinda Childs, Steve Paxton, Yvonne Rainer and Robert Rauschenberg. The following year in Vienna, Brus composed with Anni and the couple’s granddaughter, Diana, Action with Diana (Action with Diana), a performance in the family apartment that reconfigured the possibilities of human relationships within the bohemian interior. While Diana rested on a pillow in the center of the room, her father, completely doused in white paint, moved cautiously around the white-painted space facing the wall, curling up in a ball in the corner or sprawling on his back next to him. her – never actually touching her in a performance that is, touchingly, about being together. Schilling broke paint; Brus lived there.

Caroline Lillian Schopp teaches modern and contemporary art at the University of Vienna and will be visiting professor of art history at the Berlin University of the Arts this summer.