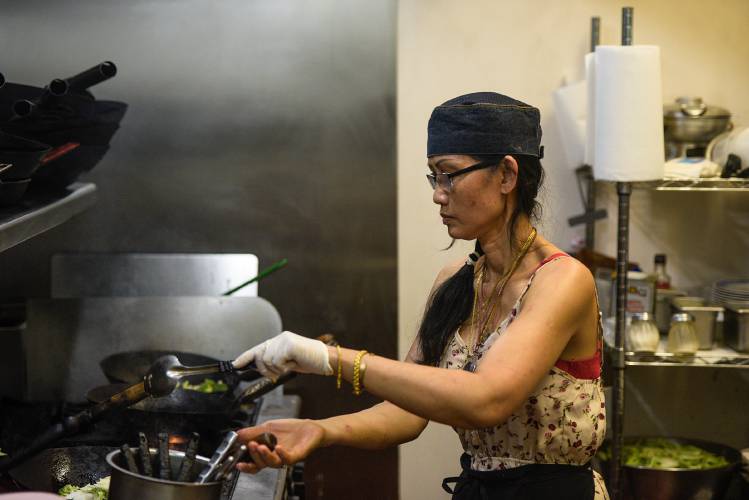 Randolph restaurant owners Nisachon and Steve Morgan weren’t the first to know that Nisachon – who goes by the name Rung – had been nominated for a James Beard award. A TV presenter broke the news to the married couple when he called to ask how to pronounce Rung’s name.

The anchor told Steve that Rung was nominated for Best Chef in the Northeast, a category that includes all six New England states.

The James Beard Foundation is a non-profit organization that celebrates people in the American food scene and creates equity within the industry.

Rung Morgan, the chef at Saap Restaurant, grew up in the Isaan region of northern Thailand. She and Steve met through online dating and they Skyped to get to know each other. After several months, Steve bought a ticket and flew to Bangkok.

“Then I went a second time and a third time,” Steve said. “Finally, we talked about getting married.”

At the time, Steve was working at Gifford Medical Center “reinventing hospital food” and Rung was working in housekeeping at the Three Stallion Inn in Randolph.

But in 2014, the couple opened Saap in a space where Steve once hosted fundraising buffets for the White River Craft Center. At the time, they were open four days a week.

Steve has since quit his job at Gifford and the couple prepare lunch and dinner six days a week.

Since the presenter’s call, the response has been “overwhelming”, Steve said. Business tripled, especially after it was announced that Rung is one of five finalists chosen from the 20 nominees. Other finalists include three chefs from Portland, Maine, and one from Boston.

Saap and the Morgans also gained nationwide recognition as NPR and 300 other radio stations across the country announced Rung’s nomination.

“People in California hear about it, people in Texas hear about it,” Steve said, referring to Saap. “People in Randolph said, ‘Oh, my cousin or my stepfather or whatever, the Napa Valley chef, is asking about this restaurant in Randolph, Vermont. “”

The Morgans National Spotlight also highlighted Saap’s differences from other restaurants. Rather than a team of waiters and kitchen staff, Saap is run solely by the Morgans, one waiter on weeknights, two on weekends, and a singular dishwasher.

And amid the accolades, the demands of running a kitchen haven’t slowed down. During a phone interview with Morgan, Rung quickly jumped on to say “Hello!” between lunch and dinner on Wednesdays, where she does most of the cooking.

“A lot of Thai restaurants are much bigger than us,” Steve said. “So they have teams of line cooks who cook the food, while my wife cooks almost every dish around. That’s the big difference.

A brief respite will come when they join their fellow finalists in Chicago this weekend for James Beard’s “Gather for Good” black-tie gala. They have their formal attire ready and a reserved room within walking distance of the Lyric Opera of Chicago where the event will be held, Steve said.

Rung will represent Vermont at this prestigious event, and the winner for New England’s Best Chef will be announced on June 13.

“It’s just like watching the Oscars,” Steve said. “Instead of actors and actresses, it’s celebrity chefs.”

Want to stay up to date with the latest business news? Sign up here to receive a weekly email on all of VTDigger’s reports on local businesses and economic trends. And check out our new Businesses section here.