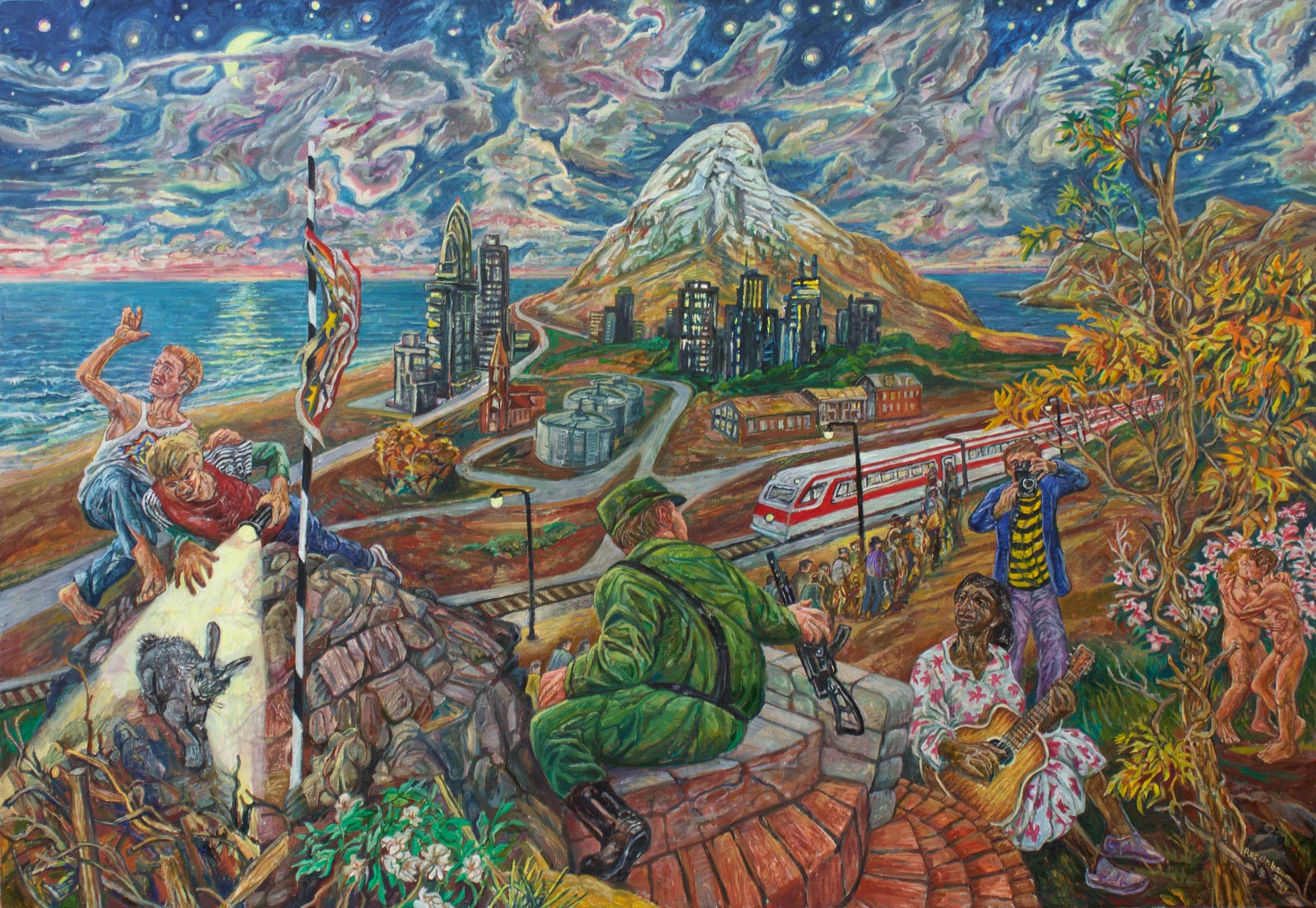 Something of a character from the folklore of Athens himself, Art Rosenbaum is a painter, muralist, and illustrator, as well as a performer, folklorist, and collector of traditional American folk music. As an educator, he influenced a whole generation of emerging artists while teaching for some 30 years at UGA’s Lamar Dodd School of Art, where he retired as the first professor emeritus of Wheatley Fine Art University. Meanwhile, the 82-year-old artist has balanced his own studio practice with trips from near and far to preserve every banjo, violin, blues, gospel, mountain ballad, and other traditional unrecorded folk song he’s had. wind.

The Dodd Galleries present an exhibition of paintings, curated by Tif Sigfrids, which visually connect these passions interwoven in the illustrious life of Rosenbaum. Bursting with seemingly unrelated elements at first glance, these works open a window into his memories, contemplations, and unique position as a person who documents and perpetuates traditions.

Offering a glimpse into Rosenbaum’s decades-long career as a teacher, “Sextet” is a series of six scenes, each rendered as both a graphite drawing and an oil painting, which were based on photographs. Black and white polaroid taken many years ago during a drawing class. Rosenbaum asked his students to stage dramas with masks and props to later use as subject matter, and the moment has finally arrived after rediscovering the images amid his vast storehouses of old photographs.

While there are clues that reveal the setting as a campus, the thumbnails largely exist without discernible plot. Instead, the viewer should consider the complexity of the works that document bursts of real-life spontaneity and playfulness, while also suggesting a layer of mystery, darkness and tension bubbling beneath the surface. While they don’t specifically refer to the pandemic, they do contain conflicting thematic elements that resonated with what the artist was feeling at the time.

Rosenbaum’s figurative paintings often take the form of allegorical tapestries that weave visual threads inspired by multiple sources. The massive painting “Strainer” illustrates this episodic approach as a cast of characters modeled on real people – Athenian poet Aralee Strange, a former student who played the banjo, and a naked couple, among others – encircle the base of a large canvas laced in a wooden frame (the strainer). It will be intriguing to see an added dimension of the gallery visitors surrounding the painting – visitors who, like the nearly life-size subjects behind them, find their paths intersecting through Rosenbaum’s magnetism.

“I like the idea, and I’ve done that in other works, of having a picture within a picture, or the past time and the present time, and sort of flow them one to the other. ‘other,’ says Rosenbaum. “In this case, I’m using that to have that older image in the center, but also, you can see through the edges of the ocean and what’s beyond to give it a kind of physicality. “

Based on an old portrait found in his collection of stereoscopic images, the scene depicts an Irish wake set in the late 1800s. Painted in a softer color palette to evoke antiquity, the joy of drinking, of playing violin and wearing masks almost distracts attention from the corpse on display on the back table.

Popular in the Victorian era, stereoscopes were devices used to combine a pair of left and right eye views of the same scene taken from slightly different angles to create the illusion of depth. In “Strainer,” Rosenbaum establishes this sense of depth through wood panels and planks that extend deep into the room, appearing almost like a portal.

“When you look at the past in a stereoscope photograph, they’re tactile, they look like that stuff,” says Rosenbaum, pointing to his studio’s treasure trove of sketches and art supplies. “It’s so different working from the flatbed photograph of the same image… So you say, ‘Wow, I’m here in this space’. Whether it shows in the painting or not, it makes the act of painting it more engaging in a way. ”

The physical limits of painting are also pushed back in “The Gray Rabbit Trilogy”, a triptych covering the period 1982-2019. Each painting contains a number of recurring details: a modern train, a mountainside town, an armed officer, a naked couple, and a gray rabbit. Observed from several points of view, trains travel through this landscape, essentially expanding and revealing more of this invented world as it goes.

In addition to visual arts and arts education, Rosenbaum has always had a passion for documenting traditional American folk music. Several albums appear on Smithsonian Folkways, and its box set The Art of Field Recording Vol. I: Fifty Years of Traditional American Music Documented by Art Rosenbaum won a Grammy for Best Documentary Recording in 2008.

Naturally, he is also a dedicated musician and has published three educational books on traditional banjo styles: Old-fashioned mountain banjo, the art of mountain banjo and Old Fashioned Banjo Book by Art Rosenbaum. His other titles include The Mary Lomax Ballad Book: The Great American Traditional Singer of the 21st Century and Shout Because You’re Free: The African-American Tradition of Ring Shout on the Georgia Coast. Mixing music and art, Folk Visions and Voices: Traditional Music and Chanting in North Georgia was created with his wife and frequent collaborator, Margo Newmark Rosenbaum, who photographed subjects as art recorded, interviewed and painted them.

When it comes to painting musical scenes, Rosenbaum generally focuses on portraying the musicians themselves and rarely illustrates song narratives, making the painting “Adamham Town” a particular exception. Native “Nottamun City”, This folk tune has evolved over the last century with various names and modifications along the way, including“ Adam Ham Town ”by singer Ozarks Ollie Gilbert, whom Rosenbaum once met. The lyrics describe a journey on horseback through a series of unusual puzzle-like chapters, which Rosenbaum depicts taking place simultaneously along a winding road.

“This is really a quest,” says Rosenbaum, “and I wanted the city not to look like an old city – and also for someone to record, sing and film – just to show that it wasn’t. this is not a storybook from the past. It is the past and the present. We are in the flow of time.

Videographers, field recorders, and photographers often appear in Rosenbaum’s paintings, emphasizing a viewer’s perspective. This degree of separation can establish a sensitivity to historical events that have not been experienced firsthand. These figures also act as bridges to the future because they bring their documentation to new audiences.

“One thing that a painting is that makes it different from a time-based medium like a novel or a movie you have to experience in a flowing time is that only one painting is there and if you want to somehow evoke the present, past and, in some cases, future, you can use various means to achieve this.

Vibrant with movement and colorful exuberance, Rosenbaum’s paintings reflect a tenderness and devout interest in the human condition. He works with time in a non-linear fashion, suggesting that the past is often still very much present, whether it takes the form of memory, song, storytelling, or the legacy of other folk traditions.

An opening reception will be held at the Dodd Galleries on Friday July 23 from 6 p.m. to 8 p.m. The exhibition will remain on view until August 19, and the galleries are open Monday through Friday from 9 a.m. to 4 p.m. and until 9 p.m. on the third Thursday of the month.

Do you like what you just read? Support Flagpole by donating today. Every dollar you donate helps fund our continued mission to provide Athens with quality independent journalism.

The ex-chief of justice moves HC against the “surveillance cameras” at CJ: The Tribune India