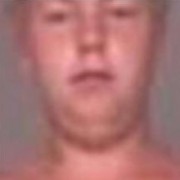 An avowed “danger to the public” who sent a photo of himself wearing a diaper to a reporter for a regional daily has been jailed.

Harry Simmons was sentenced to nine weeks in prison after messaging a Dorset Echo reporter in which he also carried a sign saying ‘I’m a pedo’.

The online serial assailant, pictured, was told in a previous hearing that he “will not be returning to jail” after admitting to the offense.

But he is currently at HMP Lewes after breaking a community order and the sentence will run alongside his current sentence, for which he is expected to be released from prison in June 2023.

According to the Echo, Weymouth Magistrates’ Court learned how the 22-year-old serial offender, who has been convicted six times for the same offense, was contacted via Facebook by the reporter after an accusation by a member of the concerned public, which has sounded the alarm bells about its presence in the Weymouth area.

Andrew Newman, prosecuting, told the court: â€œA message was sent to the Dorset Echo Facebook inbox page by a concerned member of the public.

â€œThis was information indicating that the accused had moved to the area and had already committed an offense by sending inappropriate material to underage girls.

The reporter contacted him and he responded with a picture of him wearing a diaper and a sign saying ‘I’m a pedo’.

He then sent another message saying ‘I am a danger to the public’ and asking if posters could be printed and placed across Weymouth warning people he was in the area.

“The reporter immediately blocked him and contacted the police.”

In a statement read to the court, the anonymous reporter said: â€œIt was as if he felt a thrill. It made me sick.

Simmons had pleaded guilty in Junde to one charge of sending a grossly offensive post deemed indecent, which covered multiple obscene or threatening posts via Facebook.

Simon Lacey, defending, told the sentencing hearing, “He has mental health issues and is a very pleasant person to talk to.”

Bench chair Martyn McCarthy said: â€œIt is a serious offense because of the inappropriate messages that have been sent.

“The accused did not respect the victim and his reaction.”

Simmons was sentenced to a nine-week jail term to run concurrent with his current sentence.