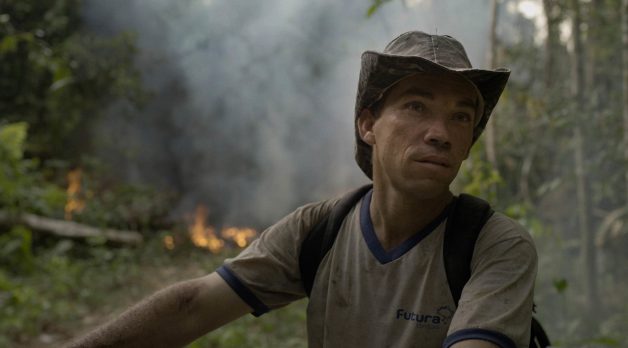 By William L. Anderson Last updated Jan 23, 2022
Share
A still of The territory

the Territory takes viewers deep into the Brazilian Amazon, allowing them to witness the ongoing conflict between indigenous inhabitants and settlers seeking to take advantage of the land. The film captures a pair of young leaders and their mentor, who defend the land with their lives, as well as settlers who hope to establish their own farm, including those who engage in clear-cut logging on their own. Director and cinematographer Alex Pritz talks about how the film’s visual style distinguishes between different perspectives, his collaboration with an Indigenous cinematographer, and how his team unexpectedly found themselves recording a settler burning the tropical forest.

Director: How and why did you become the director of photography for your film? What factors and attributes led you to be hired for this position?

Price: As a director-cinematographer, the relationships behind the camera are extremely important to me. I knew I wanted to have small crews, and often it was just me and a producer shooting. I love being connected to the image-making process in a hands-on way and wanted to be involved in the making of this film from the start. I was also extremely lucky to be able to collaborate with my co-director of photography Tangãi Uru-Eu-Wau-Wau, who directed the shooting of scenes involving the indigenous community, especially during the pandemic. Tangãi’s sensitivity and artistic instincts took the film to a new level of intimacy, and I am deeply grateful for our collaboration.

Director: What were your artistic goals on this film, and how did you achieve them? How did you want your cinematography to enhance the film’s storytelling and the treatment of its characters?

Price: The protagonists of our film see the rainforest in very different ways. Understanding these differences in perspective and illustrating them through the film’s cinematography was the central creative challenge of shooting this film. For scenes involving Indigenous participants, we often shot freehand and used a loose, fluid aesthetic at wider focal lengths. When filming with the Farmers/Settlers, we would frequently switch to a tripod with a longer zoom to give a more mechanical feel to our cinematography.

Our shot also oscillated between the big and the small: satellite images of deforestation combined with macrophotography of an individual insect. Capturing the scale of the Amazon rainforest and the diversity of life within it is an impossible task, but by shifting our focus between the big and the small, we hoped to allude to the magnificence of this particular landscape.

Director: Were there any specific influences on your cinematography, whether it was from other films, or visual art, photography or something else?

Director: What were the biggest challenges in producing these goals?

Price: The biggest challenges were always finding ways to effectively communicate the current situation honestly and directly while uncovering the hidden gem in each scene that pointed to a bigger, more elusive truth. We knew we had a moving story brought to life by passionate and engaging characters in a visually rich environment. Beyond that, we wanted to tell a story that could provide outlines – however vague – to the big abstract ideas of Manifest Destiny, or settler colonialism. Finding a visual language that could help us convey that remained the central challenge of the film.

Director: What camera did you shoot with? Why did you choose the camera you made? What glasses did you use?

Price: We shot on a Sony range, starting with an FS7 and ending with the FX6/FX9, as well as the Sony NX-80.

Director: Describe your approach to lighting.

Price: We relied almost exclusively on natural light for this film, but we used windows, blinds and door frames to help shape the available light. By shooting with full-frame cameras on the FX6 and FX9, both with dual iso, we were able to retain texture even in low-light scenes.

Director: What was the most difficult scene to achieve and why? And how did you do?

Price: By far the toughest scene was the scene of the farmers burning down the rainforest. After hiking dozens of miles through the rainforest, we were totally unprepared to shoot anything involving fire until we saw someone running down the trail with a burning branch. We couldn’t turn away or prevent anyone from burning safely, but it was an emotionally and physically difficult scene to shoot.

Director: Finally, describe the finish of the film. How much of your look was “prepared” versus done in the DI?

Price: On all cameras we shot in Sony’s slog3 profile, which was important to maintain a consistent color palette for many years of production. We knew we wanted to visually distinguish the forest from the frontier and worked with fantastically talented colorist Seth Ricart of RCO to develop a distinct look for different characters so that when an audience lands in an established shot, they instantly understand what side of the story (and from what perspective) they were entering.