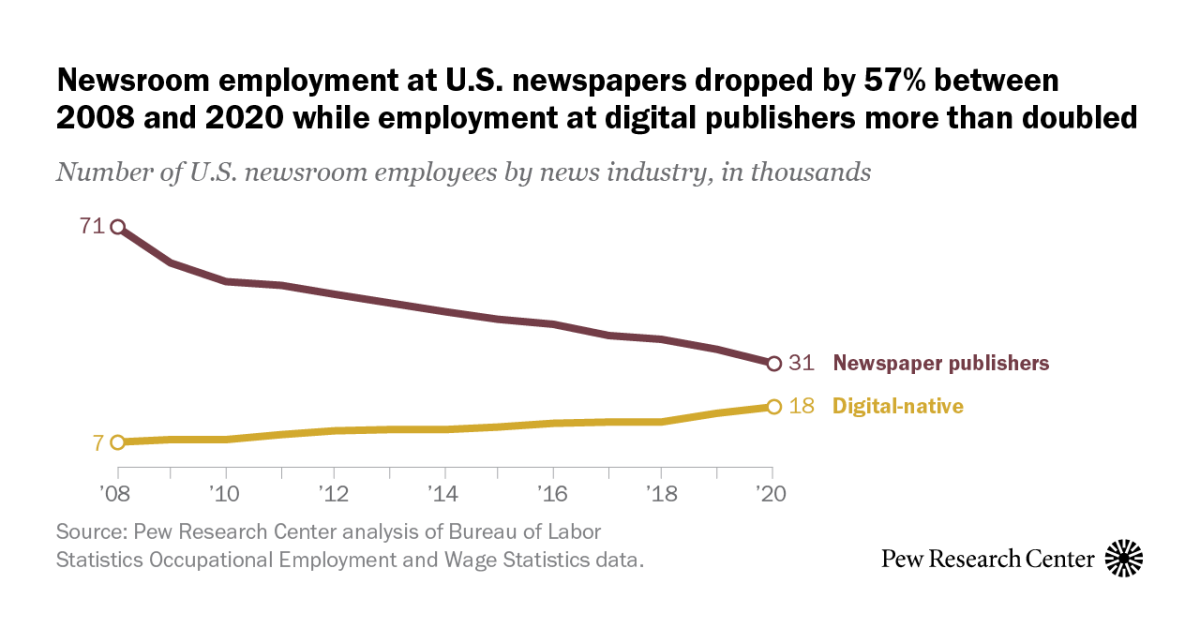 Editorial employment in the United States has fallen 26% since 2008

Newsroom employment in the United States has fallen 26% since 2008. But while newspapers have seen significant job losses during this period, digital-native news organizations have registered gains. considerable, according to a new analysis from the Pew Research Center of data from the Bureau of Labor Statistics.

In 2008, there were a total of around 114,000 newsroom employees – reporters, editors, photographers and videographers – in five industries that produce news: newspaper, radio, broadcast television, cable and “other information services” (the best match for digital news publishers). By 2020, that number had fallen to about 85,000, a loss of about 30,000 jobs.

This is the latest report from the Pew Research Center’s ongoing survey of the State of News, Information and Journalism in the Digital Age, a research program funded by The Pew Charitable Trusts, with the generous support of the John S. and James L. Knight Foundation.

Most of the decline in total newsroom employment occurred in the first half of that 12-year period. Between 2008 and 2014, the number of newsroom employees fell to 90,000, a loss of around 24,000 jobs. After 2014, the number of newsroom staff stabilized, with little change over the six-year period to 2020. (It is important to note that the 2020 data in this analysis does not reflect not fully impact of the COVID-19 pandemic on newsroom employment in the U.S. The Bureau of Labor Statistics collects data over a three-year period, which has the effect of mute changes from year to year.)

The changes in the other three industries were less dramatic. Newsroom employment at broadcast TV stations has been relatively stable, hovering around 28,000 between 2008 and 2020, now just behind newspapers in total newsroom jobs. Newsroom employment also remained relatively stable in cable television channels, with between 2,000 and 3,000 employees over the same period. Broadcasting, however, has lost 26% of its newsroom workers, from about 4,600 workers in 2008 to about 3,400 by 2020.

The sharp decline in newspaper jobs means the industry now accounts for a smaller portion of overall newsroom employment than in the recent past. In 2008, newspaper employees made up about six in ten newsroom jobs (62%). By 2020, the share had fallen to less than four in ten (36%). In 2020 alone, one-third of major newspapers in the United States were laid off, and as of August 2020, nearly 2,800 newspaper companies had received federal support through the Paycheck Protection Program, according to previous analyzes by the Pew Research Center. .

Of the different types of jobs included in this analysis, journalists and editors make up the bulk of all newsroom employees.

To note: Read the full methodology here. This is an update of an article originally published on July 9, 2019.

mason walker is a research analyst specializing in journalism and media.

Art, performance, history and community at the reopening of a Minneapolis pedestrian…