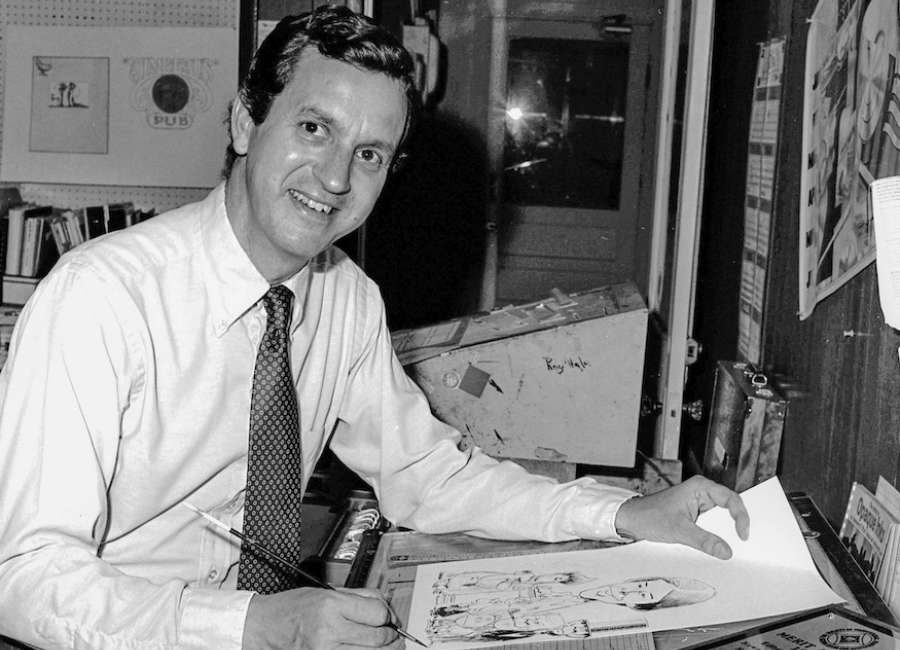 A Citadel graduate and U.S. Army veteran, Boyd traveled to Newnan in the 1960s to run the Newnan-Coweta Chamber of Commerce.

Later, he tried his hand at private business, but eventually decided to combine his love of politics and his talent to embark on a successful career.

Boyd published his first political cartoons in 1968, in The Newnan Times-Herald. The cartoons were so popular that he ended up selling them to several other Georgian newspapers.

He later teamed up with local attorney Gus Wood to create Mark-Morgan Features, a syndicated newspaper service that, in addition to Boyd’s cartoons and comic strips, offered political column, crossword puzzles, a horoscope and a church page. Mark-Morgan’s content has appeared in over 200 newspapers.

“What David was able to accomplish was significant,” said his longtime friend Keith Dunnavant, a historian and author who lives in Newnan. “He was able to leverage his particular art and worldview and turn it into a viable business. He filled Southern newspapers with meaningful commentary on politics.

Dunnavant first met Boyd in the spring of 1992, shortly after moving to Newnan. Boyd was behind the counter at The Print Shoppe on East Washington Street when Dunnavant dropped by to have some business cards printed.

They struck up a conversation over a photo of Jack Kemp hanging on the store’s wall, discovering not only a similar political philosophy but also several common acquaintances.

“The next thing I knew was that we had been sitting there for about two hours,” Dunnavant said.

Boyd asked Dunnavant if he was hungry and invited him to lunch at a new restaurant, the Redneck Gourmet – an establishment at which Boyd held court for many years.

“It was a red day in my life,” Dunnavant said. “Ninety percent of the people I met in Newnan, I met them at the Redneck Gourmet counter.”

Boyd was renowned for his political cartoons – in 1982 he became the first freelance artist to win a Green Eyeshade Award for excellence in journalism – but his illustrations also appeared in books and magazines and on greeting cards.

He lent his considerable drawing skills to the books of famed comedian Lewis Grizzard and created a whole host of iconic characters for comedian Jeff Foxworthy’s “You Might Be a Redneck” books and merchandise.

But Boyd’s real passion was politics. His scathing cartoon commentary made him the enemies of a wide range of public figures, some of whom sought him out for a confrontation and left his presence after making a new friend. Others were greatly amused by his depictions of them.

One was an Atlanta politician who received multiple DUIs and was grilled by Boyd in one of his cartoons.

“Some time after, the politician, who had a sense of humor, came to get David because he wanted the original of this cartoon,” Dunnavant said. “He was able to twist the politicians, and a lot of them were able to crack a joke because they understood that (Boyd) was an important part of the whole process.”

Boyd thrived on the furor and controversy he created and the people he met as a result, according to a 2016 article in The Newnan Times-Herald, written after announcing his retirement from the cartoon business. .

“A few of these people reached out to me and I got to know them, and we became friends,” Boyd told writer Alex McRae.

McRae was also a close friend, dating back to 1976 when McRae first moved to Newnan.

McRae said he and Boyd had many adventures together on the road over the years, but “we both swore we wouldn’t divulge some of the stupid things we did.”

These stories may remain untold, but other Boyd stories abound, many of which center on his passionate beliefs, infectious zest for life and cunning sense of humor, Dunnavant said. A running joke involved Boyd’s uncanny talent for cheating death.

As a young man, Boyd survived a tragic car accident. Later, he triumphed over a cerebral hemorrhage and cancer. He even crashed his own car in downtown Newnan.

“He’s had more lives than any cat you know,” Dunnavant said. “David survived very close calls and had a good, rich and vibrant life.”

Boyd will be greatly missed, his friends say.

“We used to watch election returns together, so it will definitely be different in November,” Dunnavant said.

“His passing leaves a huge hole in my life,” McRae said.

David Boyd was recently featured in “Artists Are Welcomed Here”, a short documentary by Jonathan and Maggie Hickman. CLICK HERE TO WATCH