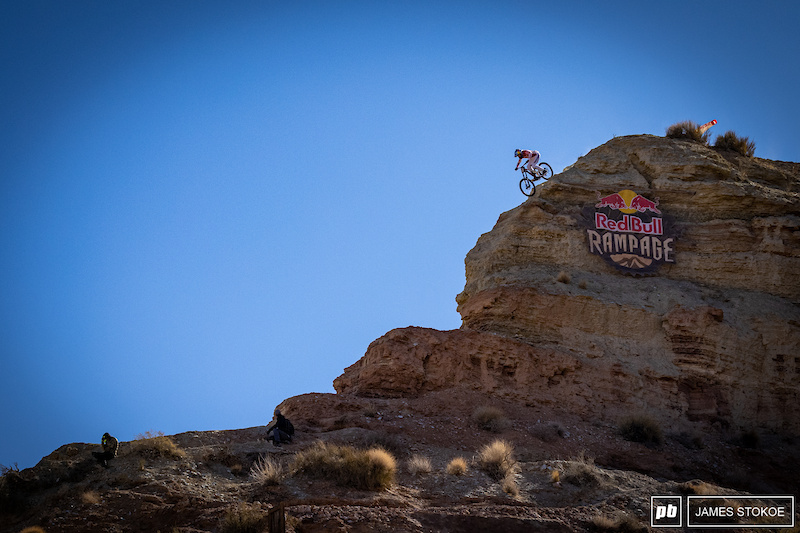 The Rampage site was in the shade and temperatures were cool as the riders headed up the mountain for their final practice session this morning. With so many variations in temperature and humidity this week, the last session was important, the riders took the opportunity to adjust their speed and prepare for the finals. Kurt Sorge had his biggest crash in training, while other riders just got comfortable on their bikes and adjusted their speeds, saving their riskier tricks for the finals.

As spectators poured into the room, the announcers warmed up and the helicopter began to spin, nervous energy skyrocketing, as everyone waited for Cam Zink, the first runner to descend. Despite a lung bruised by yesterday’s fall, Zink took a big hit on his first run, stomping on the back flip on his big fall before falling shortly before the finish line. It was a theme that ran through the entire first half of the event, with less than half of the 12 runners making it up and down without a hitch. Tom Van Steenbergen was the only runner who couldn’t escape his fall and was carried off the mountain on a backboard. We have since learned that he was seriously injured.

After the first run the best score was Kyle Strait at 77.33, but we got some incredible driving in the seconds and his first place was soon going to be challenged as first Semenuk, then Boggs, then Sorge, then T -Mac. all were ahead of him in the standings. Semenuk was incredible in his second set, and his score of 89 will end up being the best score of the day, making him the only four-time winner of Red Bull Rampage as well as the only consecutive winner of the Rampage. Sorge improved his score after returning his huge drop and finishing second, while Reed Boggs moved up to third after crushing the 360 â€‹â€‹on his drop for the second time.

What is the best movie format to see Venom: Let There Be Carnage?