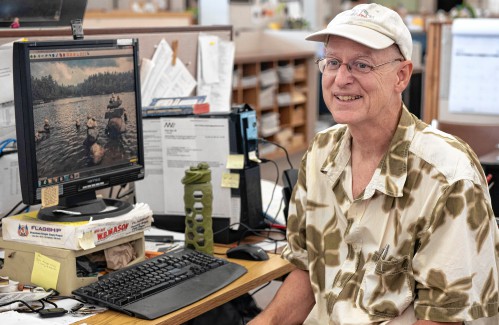 NORTHAMPTON — One day it might be visiting tobacco farms in Hatfield to learn about the return of the harvest, and another it might be chatting with folks in Granby who are building a wooden boat from scratch called Arabella.

No matter where work has taken him in the area, Kevin Gutting, who has spent the past 27 years as a photographer for the Daily Hampshire Gazette, said he felt lucky to have had so many opportunities to inform readers through his photos and occasional essays.

“It’s a real privilege to be able to do what we do and go where we’re going,” Gutting said Thursday, his last day on the job before retiring.

Gutting, 65, began his tenure at the Gazette on March 10, 1995, after an overnight drive from Ohio. Previously, he worked eight years at the Times-Reporter in New Philadelphia, Ohio, leaving that full-time position to follow his fiancée, and now wife, Evelyn Snyder, to a job that was only guaranteed 12 to 15 hours a day. week. for the Amherst Bulletin.

Within three months, however, Gutting had a full-time job, joining a team that included current photo editor Carol Lollis and two other photographers who have since retired, Gordon Daniels and Jerrey Roberts.

Coming to Northampton was not a decision he would regret, observing that the Pioneer Valley is a great place to find some background photography. “It’s so interesting here,” Gutting said. “In general, there’s a lot going on here.”

“Kevin comes from a long line of Gazette photographers deeply committed to their work documenting Hampshire county life,” said Dan Crowley, editor of Pioneer Valley. “He represented the newspaper well and his talent and experience with a camera will be missed by the newsroom and the community.”

“Kevin is an incredibly talented and caring photographer with an unparalleled attention to detail,” Lollis said.

The son of an Army officer, Gutting spent time in Germany, Kansas, Korea, Ohio and then Texas, where he earned a degree in journalism at the University of Texas, after starting by studying civil engineering.

“When I realized he almost majored in civil engineering, it all made sense to me,” Lollis said. “He has something that not all photographers have: an engineering brain with an uncontrollable craving for creativity. He will be greatly missed as a member of our staff and in the community. »

His first published photograph was in the Daily Texan in 1984, showing former Vice President Walter Mondale, then the Democratic presidential candidate, on the campaign trail outside the LBJ Library.

At the Gazette, Gutting sporadically covered national political events, including a presidential debate between President Bill Clinton and Republican challenger Bob Dole at the Bushnell Theater in Hartford in 1996, and in 2017 heading to Washington, D.C., for the March. women.

Over the years Gutting has won awards from the National Press Photographers Association and the New England Newspaper & Press Association. He has also seen changes in the industry, remembering the days of having to read film negatives on a light table and the past 20 years of digital-only photography.

On Gutting’s last day, he took a self-contained photograph of a person in the water in the DAR State Forest in Goshen.

He has no particular plans in retirement other than cycling, which he will pursue at the JAM Fund Grand Fundo at the Cummington Fairgrounds this weekend. This ride benefits youth participation in cyclocross.

Gutting observes that he will no longer have what he calls the “pass” that journalism allows to approach people, often unexpectedly, and to find out more about them.

Scott Merzbach can be contacted at [email protected]