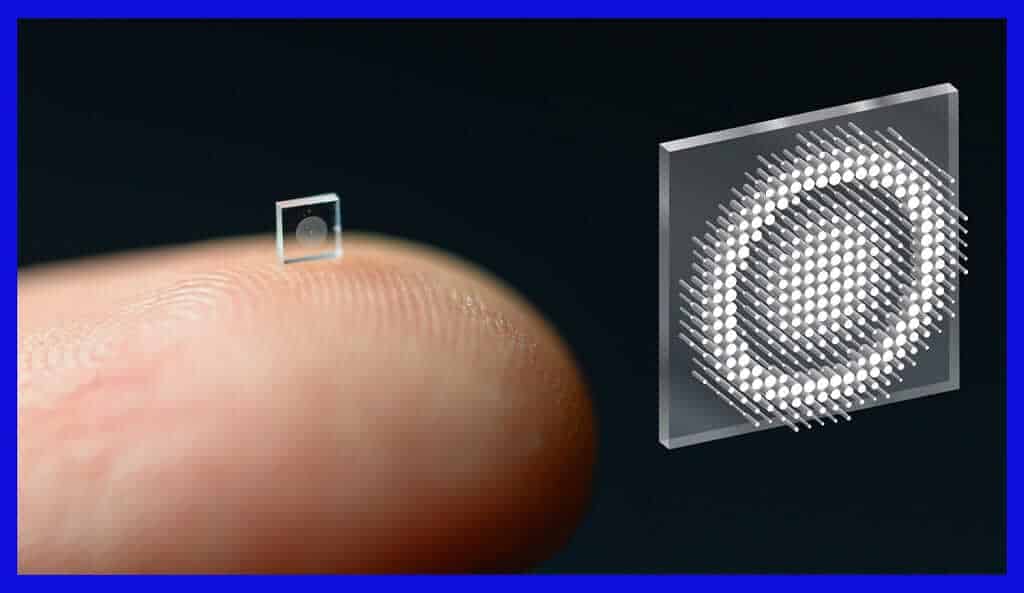 Princeton and researchers at the University of Washington have built a grain-sized camera capable of capturing clear, color images. It is composed of a light-catching metasurface that could eventually be enlarged to turn entire surfaces into sensors.

Existing micro cameras use metasurfaces, but physics limits their image quality. A typical camera creates sharp images by directing light into focus through a series of lenses. However, the camera must be large enough to accommodate these lenses.

“Meta-optics,” which uses extremely small nanostructures capable of capturing and re-emitting light, is one way to shrink a camera. Each of these miniature structures collects photons that form light, and the metasurface then converts those photons into a signal that a computer can understand. Think of them as tiny antennae.

The new device looks like a transparent panel with an etched circular pattern. Each of the 1.6 million cylinders in this half-millimeter-wide circle is precision-built to bend light in the appropriate direction so that the grating bends the optical wavefront. After that, signal processing algorithms create an image from the data.

The images produced are significantly more precise than those of other small sensors. In experiments, the team’s researchers demonstrated that the new sensor acquired images with a spatial resolution of 214 line pairs per millimeter and a resolution of 720 x 720 pixels in true color, capturing wavelengths ranging from between 400 and 700 nm in natural light. Additionally, the device has a field of view of 40 degrees and an f-number of 2. The team says the images are comparable to those obtained by a traditional compound camera lens half a million times larger than their new sensor.

Post-processing algorithms handle much of the hard work of improving image quality. They were created in tandem with the metasurface to ensure they work well together. Another advantage is that the devices are simple to fabricate, implying that they should be relatively easy to scale up for mass production. They are composed of silicon nitride and the surface nanostructures can be produced by deep ultraviolet lithography, a process already used to generate semiconductors.

According to the researchers, these devices could be used for medical imaging in the body, providing enhanced vision for small robots, or even turning almost anything into a camera by coating its surface with thousands of these sensors.

“We could turn individual surfaces into ultra-high resolution cameras so you don’t need three cameras on the back of your phone anymore, but the whole back of your phone would become one giant camera. So we can think of completely different ways to build devices in the future.

The research was published on November 29, 2021 in Nature Communication.