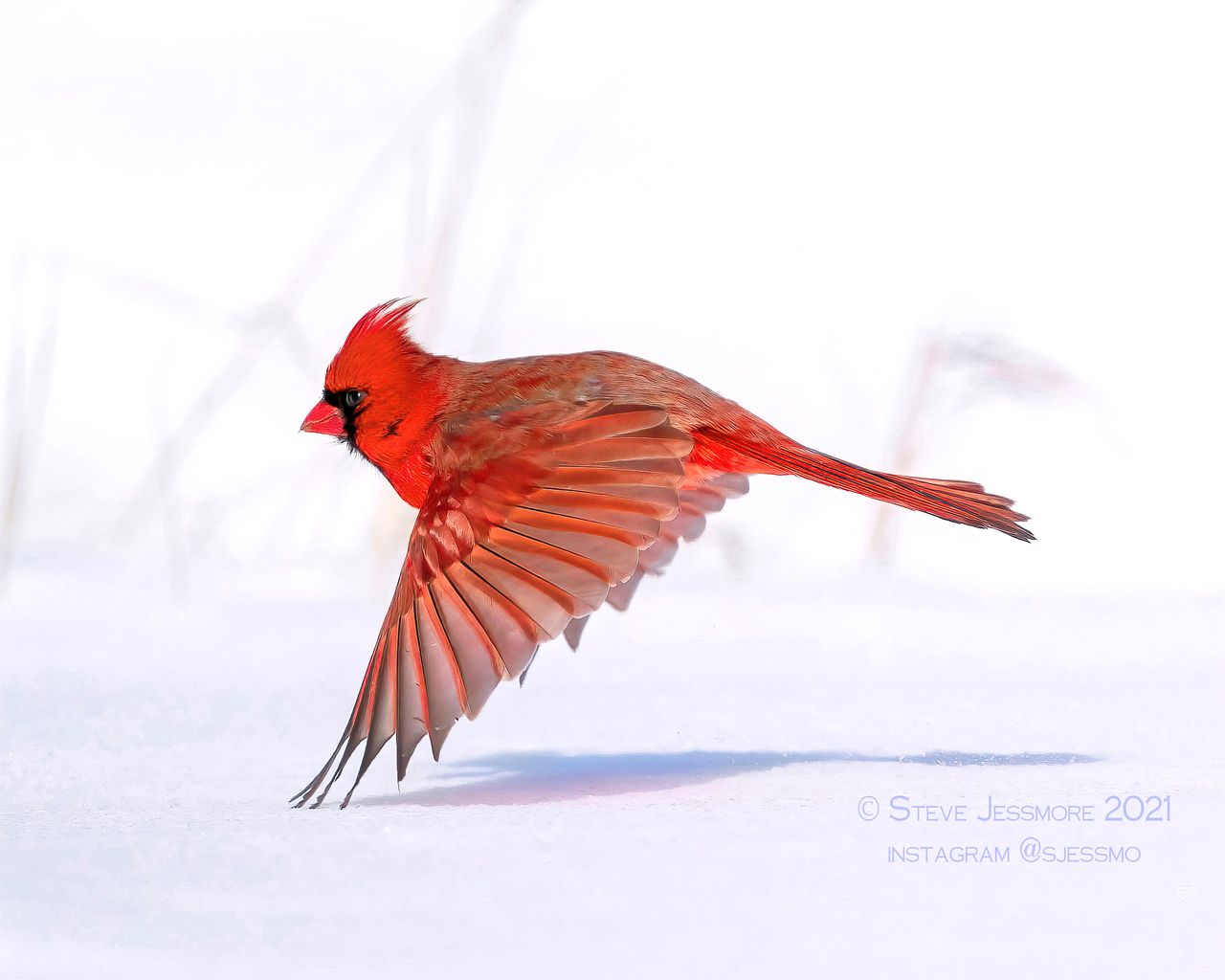 Steve Jessmore of Grand Rapids won the professional category at the 2021 National Audubon Photography Awards, an annual competition presented by the National Audubon Society that showcases the best in bird photography from across the country.

Thousands of photographs from across the country are submitted each year to the competition, which had five categories this year: Professional, Amateur, Youth, Bird Plants and Videos.

Jessmore won first place in the professional category of the competition for his photography, “Northern Cardinal in Flight,” which depicts a northern cardinal flying through snow in rural Muskegon County.

He found the bird bright red on a “very cold winter day” in January 2021 while searching for eagles and snowy owls, according to the “story behind the blowDescription that Jessmore submitted to Audubon.

“While navigating back roads, I noticed a rough-legged hawk perched on top of a pine tree, but all I captured was its tail as it took to the skies,” Jessmore wrote. “It was then that I saw a male Northern Cardinal flying from plant to plant, feeding on the seeds, his red feathers reflecting in the crisp white snow dotted with ice crystals. I took the first shot when it took off. In the second frame, the striking songbird was gone.

Jessmore also earned an Honorable Mention in the Professional Category for “Circle of Life,” an image of a female Red-tailed Hawk catching a chipmunk.

Jessmore photographed the bird in Kensington Metropark in Milford Township. He spotted the female Red-tailed Hawk while hiking on a snowy afternoon in December 2020.

“She (the hawk) flew out of sight, but we found her nearby jumping and grabbing leaves, trying to make her missed prey reappear,” Jessmore said.

“When an Eastern chipmunk fled under the debris a few minutes later, the hawk quickly grabbed it and carried it to a tree. It was amazing to see this connection between predator and prey, a connection that I am not used to sharing in a photo of wild animals.

Jessmore was selected among 2,400 photographers who participated in the 2021 Audubon Photography Awards, submitting 8,770 images and 261 videos.

Wildlife photography began as a quarantine hobby for Jessmore. At the start of the coronavirus pandemic, most of Jessmore’s freelance photographer jobs were canceled and he had plenty of free time.

The former photojournalist decided on a challenge he had never tried before: photographing ducks. He bought a kayak and spent his mornings paddling before sunrise to photograph birds on the Torch River near his cabin.

“I was going there before sunrise and I would sit there and wait, and all of a sudden some ducks were flying over my head, and I was catching them, but it was a real curve. learning, ”he said. “I really fell in love with the ducks and the flight.”

This project inspired Jessmore to get more serious about bird photography. He invested in new lenses and camouflaged gear and spent more time with his camera outdoors.

“It wouldn’t be unusual for me to sit in one place for 4-5 hours, even in winter, and do nothing and just wait for the birds to pass by, and have to be ready for them.” , did he declare. mentionned. “I enjoyed the chase of waiting for them.”

Jessmore, who worked for years as a photojournalist for MLive / The Flint Journal, likened wildlife photography to the rush of photojournalism.

“I had to be ready because I never knew when they were coming,” he said. “I couldn’t be sitting there scrolling my phone or being distracted. I had to be ready to shoot, so I always had to have my finger on the buttons and the camera ready to go and be on alert. And I love that feeling. That’s what I love about this type of photography, is that I love that feeling, it reminds me of the adrenaline rush of photojournalism.

As someone who has only been photographing birds for just over a year, Jessmore said it was a complete surprise and honor to win the prestigious award for nature photography.

“I really feel that the work I do makes me happy and that I took up the challenge I set for myself in May 2020, to learn to do something new,” he said. he declares. “To think that I challenged myself to do something and accomplished that is pretty cool.”

Originally from Saginaw, Jessmore worked as a photojournalist for MLive / The Flint Journal until 2013. After that he went to Central Michigan University to be a photographer / photo editor for five years, and moved to Grand Rapids in 2018 where he has been working since. as a freelance photographer.

To see more of Jessmore’s bird photographs, check out her Instagram, @sjessmo, where it regularly posts content.

Great Lakes water temperature returns to the feel of midsummer