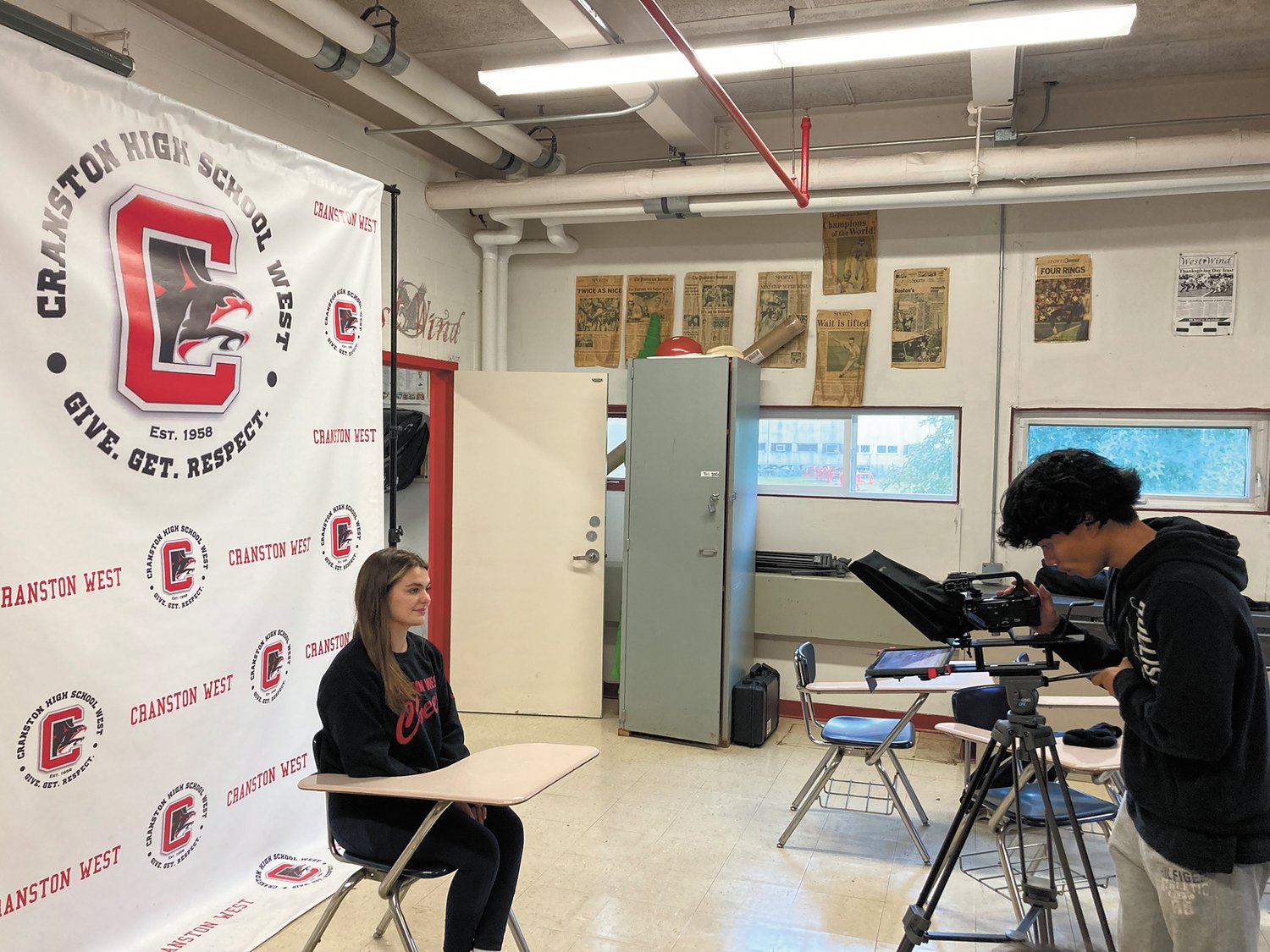 Eric Zhang, a senior in Jay Jones’ media studies class, describes himself as an editor. He enjoys choosing soundtracks to accompany video footage and capturing a variety of engaging shots.

“My favorite part of editing is the creative process behind it,” Zhang said.

“What I like about the class [media studies] move around, explore the school and take photos of student life,” Zhang said.

This year, the program is creating a green screen and podcast space for students in a former editing area attached to Jones’ classroom. Individuals are filmed in front of the green screen and a separate background can be filmed and added to the final image. Jones, who runs the Journalism and Media Studies program, and John Fontaine, principal at Cranston High School West, brainstormed how to recreate the space that previously housed cubicles and desktop computers. According to Jones, once the students received laptops, the space became useless.

The renovated space will include several chairs, a loveseat in the corner and a podcast desk. Additionally, there will be a green screen and a backdrop in space; the Cranston Area Career and Technical Center (CACTC) building academy is carrying out the renovations.

With the evolution of media, space gives children the opportunity to use their skills in a way offered by new technologies.

Currently, the hall’s floor is being worked on, and Jones said the project should be complete by mid-autumn.

The Journalism and Media Studies program offers a variety of learning opportunities and projects for students, such as work on the West Wind Newspaper, West Watch (TV show), Video Yearbook, and Media Club . The content created is critiqued by students in the class, refined and then shared with students and faculty across the school. In addition, students are required to cover a sports game at school and can subscribe to one of the program’s two (soon to be three) cameras. Jones said the students use editing tools such as iMovie, Final Cut Pro, Photoshop, Phonto and Prompter People. Students take Jones’ Journalism and Media courses by choice or because of their interest in the field.

Sophomore Gisele Rotolu is in her second year on the program and said last year she worked with a partner on creating a music video for “Summer Nights” from “Grease.” She recorded the guys’ part at the Garden City Center gazebo and the girls’ part in a friend’s room where they all did their hair and picked out clothes.

Rotolu initially took up broadcast journalism to improve her writing, but found she enjoyed being on camera as an anchor where she read from the teleprompter and later edited the script.

Like Rotolu, senior Molly Fitzgerald also enjoys being in front of the camera and is considering a major in communications with a concentration in television production. Two weeks ago, Fitzgerald and his classmates were working on voiceovers and sound on tape. Together they analyzed the broadcast clips and looked at the proportion of the voiceover clip versus a live clip.

The students also used their skills to carry out community projects. Senior Tia DePalma said last year the students met with the Cranston Early Learning Center’s early years director, Charlene Barbieri, to create a welcome video for parents. The students spent several days taking videos, refilming and presenting Barbieri with the final product. Senior Hailey Davis helped with a similar project where Jones students interviewed kids on the CACTC path – asking them what they liked about their career and tech curriculum; the footage was compiled and turned into an iMovie for an open house.

In addition to the Journalism and Media Studies program which has about two dozen students, Jones runs the school’s Media Club every Tuesday which consists of 30 students. Lela Starr has been with the group for several years and enjoys the editing component of the club, especially the addition of music to sports footage that matches the energy of the game.

“It’s cool to see how this all comes together,” Starr said.

Nathan Rojas, a journalism student 2, is the executive director of layout and design for the Media Club. One of his recent tasks was to interview West’s new principal and design the copy so it could be sent to students and faculty.

One of the media studies students’ most recent assignments this year included creating a one-minute film without words; the focus was on using a variety of close, medium, and wide shot types. Jones showed the videos in class, followed by reviews.

Some of West’s graduates who have gone through the journalism/media program who have found success in the industry include Tom DeNucci, Nick Sczerbinski, and Allie Melillo. One of the school’s alumni coded an app for the journalism and media curriculum.

“So many people who continue to play important roles in life are ready to come back to share Falcon’s pride and give back to the community that has given them so much,” said English Department Chair Stephanie Kaffenberger.

In the future, Jones would like to see the televisions in the cafeteria working again so the school can get West Watch student shows on the screen. For now, students and faculty are eagerly awaiting the new green screen and podcast space.

At the MFA, a new show looks back at what life left behind