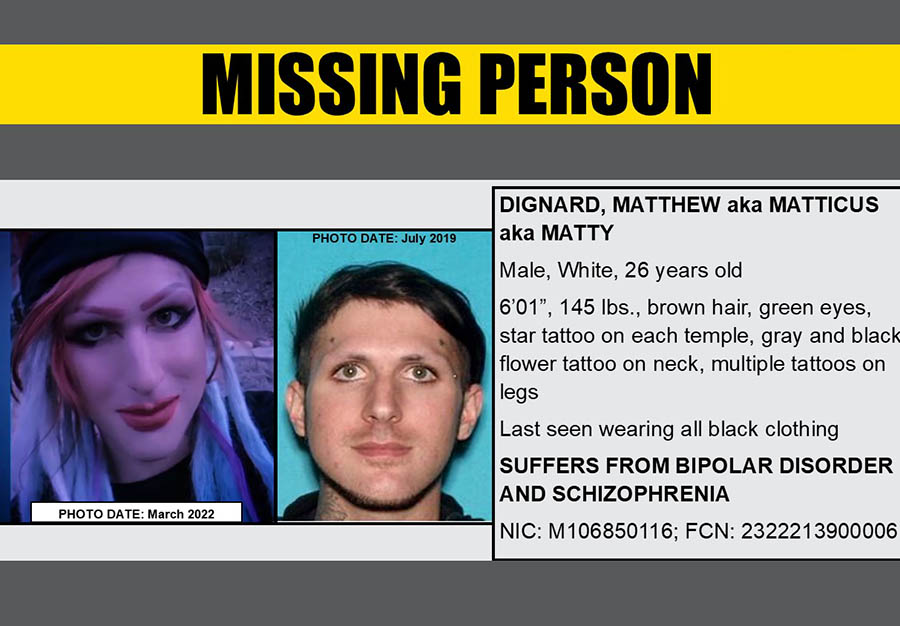 The Los Angeles Sheriff’s Department today released a missing persons report seeking the public’s assistance in locating a 26-year-old man with schizophrenia and bipolar disorder who was last seen in the city of West Hollywood. Matthew Dignard, also known by the nicknames “Matticus” and “Matty,” was last seen in March in the 8700 block area of ​​Santa Monica Boulevard.

Matthew Dignard is white, 6-foot-1, 145 pounds, with brown hair and green eyes. He also has tattoos of a star on each of his temples, a gray and black flower on his neck, and multiple unspecified tattoos on his legs.

It is not yet clear why his photo is being released now since he has been missing since March, but anyone with information about Dignard’s whereabouts is asked to contact the LASD Missing Persons Unit at 323-890-5500. Anonymous tips can be called into Crimestoppers at (800) 222-TIPS (8477), or by texting 274637 (CRIMES on most keyboards) with a cell phone. if you see something, say something. Anyone with information about the shooting death can also leave a tip at https://www.lacrimestoppers.org.

Your identity is always encrypted and anonymous. No personal information, phone number, email, IP address or location is ever requested, recorded, traced, tracked or monitored. Period.

The goal of Los Angeles Regional Crime Stoppers is to prevent and reduce crime, by forming a partnership between the community, law enforcement and the media to offer anonymity and cash rewards to anyone providing information leading to an arrest.

Crime Stoppers uses a three-part approach to preventing and solving crime. The first part of the program is to empower the community by providing a safe way to report criminal activity. Second, Crime Stoppers partners with all forms of media in the Los Angeles area to educate the community on how to report crimes anonymously. Law enforcement is the last part of the triangle; they follow the advice of
community members.

The Crime Stoppers program is funded by private donations and annual fundraising events. No tax dollars are involved. The reward money paid out by the program comes from fundraising and donations from concerned citizens and businesses.

Photo Club Topic: “Have phone cameras finally caught up with the big iron when it comes to image quality?”