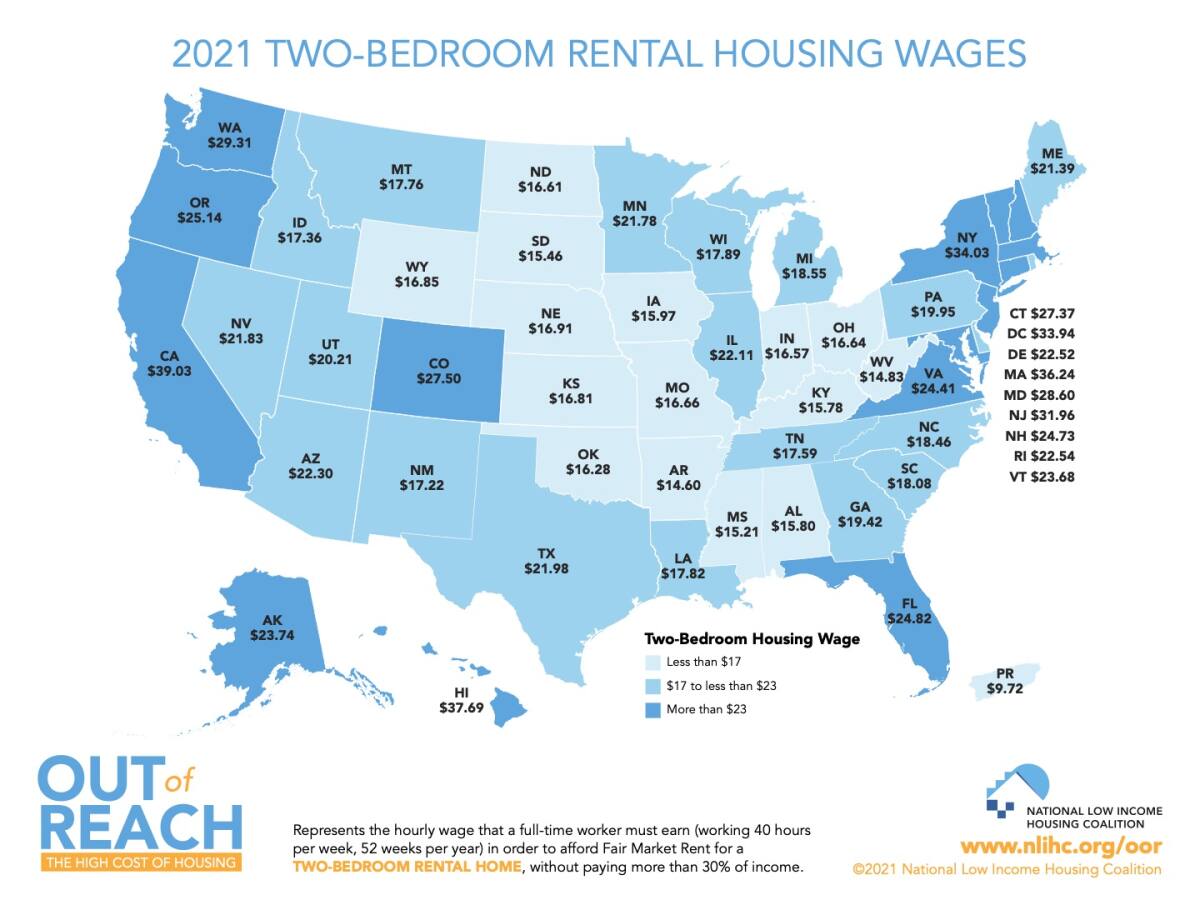 How much do you have to earn per hour to pay rent in Sonoma, other North Bay counties?

Residents of Sonoma County must earn at least $ 38.38 an hour to afford a two-bedroom apartment, according to a recent report by the National Low Income Housing Coalition.

The annual “Out of Reach” report examines how much a full-time worker must earn to afford rental accommodation in the United States without spending more than 30% of their income. The report uses Fair Market Rent, which are estimates determined by the US Department of Housing and Urban Development, to determine the cost of monthly rent in counties nationwide.

About 30% of households in Sonoma County are renters with an estimated average hourly wage of $ 20.05, according to the report. A resident would have to earn $ 38.38 per hour (or $ 79,840 per year) to afford a two-bedroom rental unit that costs $ 1,996 per month. To cover the cost of rental housing, a minimum wage worker would need 2.7 jobs.

Without enough money to pay rent, workers are forced to live in overcrowded housing, move to more affordable areas, or forgo medical and dental care or other necessities, said Jenni Klose, director. Executive of Generation Housing.

“We’re not going to have the people to support the industries that we have,” she said. “It’s going to become a place where rich people live and lose its ongoing sustainable industries.”

The high cost of rental housing has disproportionately affected people of color who live in Sonoma County, she added.

Based on IPUMS data, 54% of the county’s Latino population and 71% of the black population spend more than 30% of their income on rent.

“Unless we really decide to take this seriously and be innovative and daring in our solutions, it’s going to get worse. It’s not sustainable, ”Klose said.

The hourly wage needed to afford rental accommodation is similar in Napa County, where 36% of households are renters who earn an estimated average hourly wage of $ 19.29, the data shows. To cover the fair market rent of $ 2,018 for a two-bedroom unit, a resident would have to earn $ 38.81 per hour (or $ 80,720 per year). A resident earning the minimum wage would have to take on 2.8 jobs to cover the cost.

In Lake and Mendocino counties, residents would need to earn about half of what they would earn in Sonoma and Napa counties to pay rent.

Marin County’s fair market rent is about three times the rental housing costs of Lake and Mendocino counties, according to the report. It is also tied with the counties of San Francisco and San Mateo as the most expensive in California. With fair market rents for two-bedroom units at $ 3,553, residents are expected to earn $ 68.33 per hour (or $ 142,120 per year). A worker earning minimum wage would have to have 4.9 jobs to cover the cost.

California has the highest housing wage in the country, followed by Hawaii, Massachusetts and New York, according to the report. An hourly wage of $ 39.03 would be required to cover the California market’s fair rent of $ 2,030.

Renters make up nearly half of California households, and the average renter wage is currently $ 24.89, more than $ 14 less than what is needed to pay fair market rent.

Picture this: a family portrait | Chroniclers