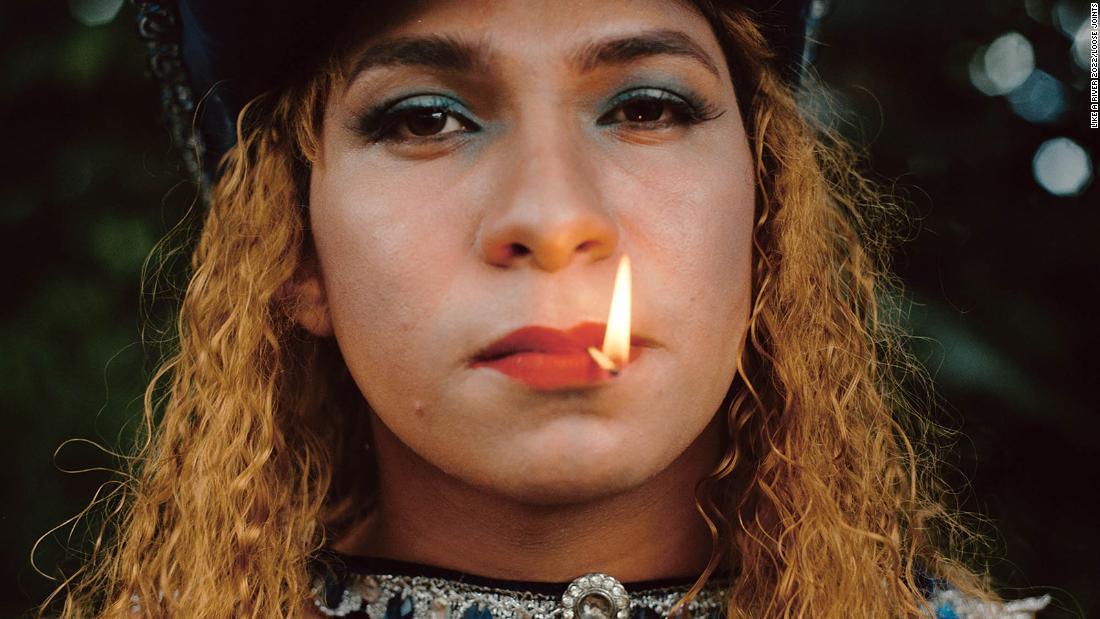 While dining at a restaurant in Careiro, a small town in the heart of the Amazon rainforest, Daniel Jack Lyons was unexpectedly approached by a local drag performer, Wendell.

Two days earlier, the American photographer had met with young community leaders in the hope that some might take part in a new project exploring the lives of marginalized young people in the remote region of Brazil. The news had spread quickly.

“He came up to me and was like, ‘You’re the photographer, I’m a drag queen and you’re photographing me on Thursday,'” Lyons recalled in a phone interview.

The pair met and the resulting portrait – Wendell staring defiantly at the camera with a lit match in his mouth – became the most defining image in the dreamy new coming-of-age series. adult from Lyon, “Like a river”. But as a trained photographer and anthropologist, Lyons seems more interested in the human stories behind his images.

“Wendell drags out performances, but he also tends to his mother’s small business selling churrasco (grilled meat) at night in the market,” he said. “She’s quite ill and he’s taken over. So that’s a very sensitive thing: he doesn’t want to do any flirting and (have any discrimination as a result) negatively affect the business, that’s what they’re survive.

“So to overcompensate, he became this ‘mother’ to all the non-binary, trans and queer kids in town,” Lyons added, recounting how Wendell opened his home to troubled teens and helped transgender youth recover. access hormones. therapy in the nearest town, Manaus.

About half of the subjects in Lyons’ new book identify as trans, non-binary, or “queer in some way,” the photographer said. Credit: like a river 2022/loose joints

Settling in Careiro and on the nearby Tupana River for up to eight weeks at a stretch, Lyons went on to photograph dozens of other young people for the series, which is currently on display at France’s Rencontres d’Arles photo festival. About half of the subjects in his companion book are trans, non-binary, or “queer in some way,” said the photographer, who identifies himself as queer.
Their stories contain tales of turbulent gender transitions and family friction. One person Lyons spoke to for the project had been disowned by his wife and parents, and separated from his son, after coming out as trans. The photos were also taken against a backdrop of social stigma in a country where homophobic hate crimes are on the rise and LGBTQ rights seem increasingly under threat (Brazilian President Jair Bolsonaro, who once told Playboy magazine that would be “unable to love a gay son,” expressed his disapproval of the country’s same-sex marriage laws).

However, the dominant spirit of the images of Lyon is that of resilience.

“There was a struggle between everyone I worked with, for sure,” he said. “But it’s almost like discrimination is just understood in an unspoken way. It’s the undercurrent, it’s there, but as I became friends with people, there was a lot of positive discussion.

“There was a (sense of) perseverance – celebrating the fact that they can walk around this town and not care what people think.”

Borrowing its title from a Brazilian poem of the same name, “Like A River” depicts not only the region’s LGBTQ communities, but other groups “living on the fringes,” as Lyons puts it. Her intimate images capture teenagers involved in artistic and musical subcultures, as well as Indigenous youth with complex “intersectional identities.”

The photographer also turned his lens to young land activists, with environmental threats a recurring concern among his subjects. He said fear of illegal mining and deforestation has noticeably increased in Careiro since he started the project in 2019.

Lyons has also turned his lens to the region’s environment, which he says is increasingly under threat. Credit: like a river 2022/loose joints

“There is obviously a lot of discrimination based on being queer, but I think the biggest threat to people is that Bolsonaro created this wild west in the Amazon. There is a lot of fear that loggers and illegal miners can enter a community,” he added, referring to recent reports of miners attacking indigenous villages in search of gold and other resources.

Lyons, who has previously produced series about marginalized youth in Mozambique and Ukraine, treats portraiture as an act of collaboration – and his subjects as friends.

The photographer focuses on building relationships before he picks up his camera. He doesn’t usually capture people the day he meets them — and he empowers his collaborators to know where and how shoots are taking place, including what they’re wearing and how they’re posing.

“It’s not traditional photojournalism where you rush in, take pictures and walk away,” explained Lyons, who said he’s still in touch with many of the people featured in “Like a River.”

“It was so much more than that. I wanted to focus on interacting with people and really cherishing those intimate moments they shared with me.”

“Like a River” is presented at Photo festival of the Rencontres d’Arles until August 28, 2022. A book of the series, published by Loose Joints, is available now.