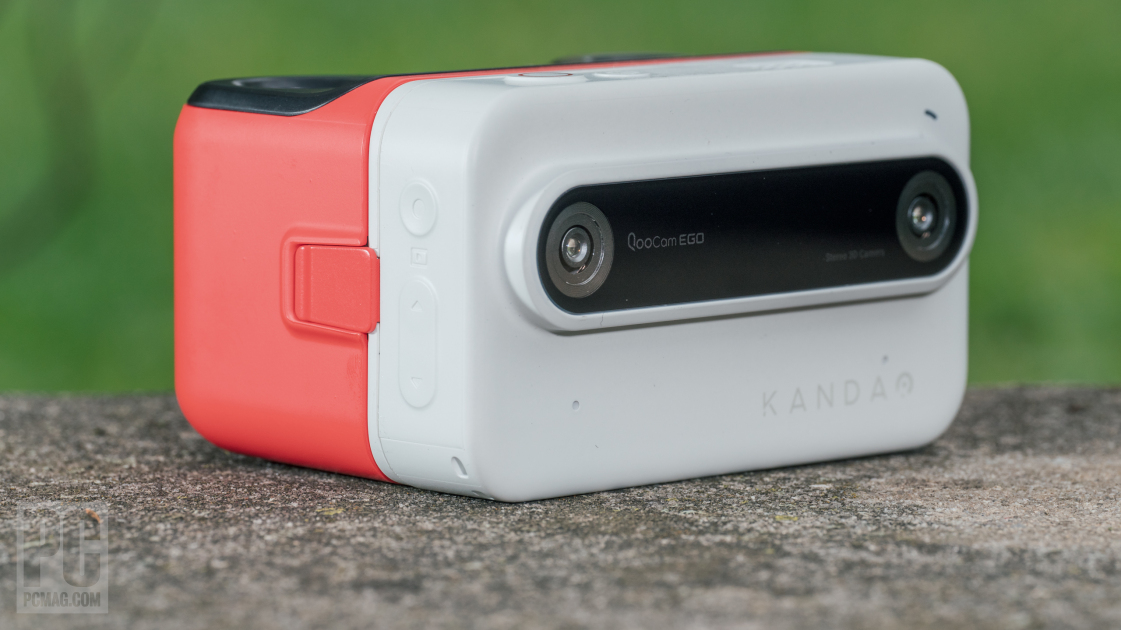 The Kandao QooCam Ego ($369) is a dual-lens pocket camera that produces 3D stereoscopic images and videos. The concept is not new, of course. Stereo cameras were born in the 1850s(Opens in a new window)and while the medium hasn’t traditionally been mainstream from a content creation perspective, many of us have looked at stereo images through Vue-masters(Opens in a new window) as children. The Ego dives into that nostalgia with a View-Master inspired eyewear set. Unfortunately, poor performance, an average screen, and anemic battery life make it difficult to use.

The QooCam Ego is lower and narrower than a smartphone, but much thicker. It measures 2.1 by 3.7 by 1.1 inches (HWD) and is a bit heavy for its size at 5.6 ounces. The device’s firm plastic frame is high-quality and sturdy enough, while a non-slip rubbery finish makes it easy to grip.

Kandao sells the Ego in Aurora White or Midnight Black; we received the first one for evaluation. Both packages come with a set of viewing glasses in a red and black finish. The glasses attach magnetically and allow you to view your photos and videos in 3D. Once you attach the glasses, the resemblance to a View-Master is immediately apparent.

You can also use the goggles as an optical viewfinder complement for taking photos, but that’s a bit awkward in practice: with the goggles resting comfortably against your nose, the lenses point skyward. The mirrors inside the viewing glasses require that periscope-style viewing angle, but it’s a shame there’s no direct eye-level accessory viewfinder for taking pictures.

Although the QooCam looks great outdoors and certainly not feel of poor quality, it does not manage all that very well. Speed ​​is a big issue; the camera takes forever to start up (about 25 seconds), for example. Switching between video and photo modes also feels off.

The long boot time wouldn’t be so bad if the Ego had a decent battery or instant wake mode. Unfortunately, it is not the case. You can practically watch the battery gauge drop in real time. I got through a quarter of the battery life with just half a dozen photos and a few short video clips. This is by no means an all-day camera. The device does support USB-C charging though, so you can pack a power bank for extended outings.

The rear screen displays crisp detail and is easy to see indoors, but hard to see outdoors on a sunny morning. It just doesn’t have the brightness to cut through the glare and the viewing angles aren’t great either. The screen supports touch input, which is the primary way to interact with the camera and change settings. Touch response works well, but on-screen menus are slow to navigate. The camera’s processor just seems underpowered.

The camera works well on its own, but you can also pair it with the QooCam companion app (available for Android and iOS). The app unlocks the basic features you might expect. You can use it to control the Ego remotely, transfer media to your phone for editing, or perform mundane tasks like firmware updates.

The login process is, well, weird. I’ve covered smartphone-connected cameras since the days of Eye-Fi cards and watched the industry figure out the right way to connect smartphones and cameras. The Ego does things differently than most: the app recommends that you launch your smartphone’s connection mode, then connect the Ego to the hotspot network.

What’s worse is that the connection didn’t work, at least for me and my iPhone 13. The Ego connected to my phone’s hotspot, but the app couldn’t see it. However, I was able to get the camera to talk to my phone by connecting the two to my home network. The camera connects to 2.4 GHz and 5 GHz Wi-Fi networks.

There are beyond basic tools in the app, including after-the-fact video stabilization, so you may find it useful to use, especially if you don’t have access to desktop editing tools. The app also lets you share 3D footage in a variety of ways, including side-by-side projection for headset viewing and what Kandao calls Parallel Eye Video, a split view that should show the 3D effect when you watch it. with eyes crossed. I haven’t had much luck seeing the 3D effect with this projection, but again, I’ve never done well with it. Magic Eye Posters(Opens in a new window).

The Ego uses two lenses to see the world in 3D. Each captures the same angle of view, but they’re far enough apart (a few inches) to give a sense of depth when viewing the resulting image through a stereoscope. I used the camera to view 3D images with the included glasses.

The camera sees quite a wide angle, about the same as the main lens of most smartphones. However, you have to be a little careful with focusing, as the Ego doesn’t have autofocus.

Instead, you use two buttons on the side of the camera to adjust focus. The Ego has six focus areas covering approximately 10.8 inches (0.3 meters) to infinity; that’s a big enough depth of field in images to give you a little leeway in estimating focus distance. One thing to note: you set focus independently for stills and video modes, so it’s always a good idea to check the set focus distance before you start a clip or take a photo.

When it comes to image quality, point-and-shoot sized sensors and lenses are more in line with compact cameras and mid-range smartphones than ILCs or flagships. Photos are crisp and show good colors, but dynamic range isn’t quite HDR.

Detail disappears in highlights and shadows, and you have to rely on EV compensation to get proper exposure in dynamically lit scenes. Accessing the feature is a little fiddly though – the touchscreen interface requires tapping in the right place to bring up the exposure options. If your finger is off the mark, you are inadvertently switching from photo mode to video mode (or vice versa). It’s a shame you can’t just tap what you want to focus and expose properly on the rear screen, like you can with a smartphone.

The video is available in 1080p with a frame rate of 30 fps or 60 fps. I recorded footage at 1080p60 and found moving images to be on par with stills in terms of color fidelity and dynamic range. 1080p video is not so pixel rich, so the video looks less sharp. Stabilization is not included, so handheld footage is predictable. That said, the camera has a tripod socket and the QooCam app also includes a digital stabilization feature.

The Kandao QooCam Ego quickly reached its funding goal thanks to a Kickstarter campaign, which shows that creators have some interest in stereoscopic content. The wide availability of consumer VR headsets means that there is already an audience for 3D content. But if you don’t want to invest in VR hardware, you can just use the included View-Master style stereoscope glasses to display content on the Ego’s rear screen in 3D.

Image and video quality is lower than flagship smartphones, but the Ego is such a different kind of camera that it’s not a big deal. Your smartphone can’t do 3D stereoscopic photos, after all (well, they used to, but that was a long time ago). The Ego’s manual focus interface really asks you to slow down and take your time dialing in a frame.

Stereoscope fans may be able to overlook the Ego’s flaws and justify the $369 price tag as there aren’t many other cameras like this and certainly none this affordable. The ZCam K1 Pro(Opens in a new window) is the only other stereoscopic 3D camera on the market at press time and it costs $2,995. But we can’t recommend the Ego to most creators, as a sluggish response, significantly underpowered battery, and poor touchscreen interface significantly hamper its usability.

The Kandao QooCam Ego uses two lenses to capture 3D images and videos, but the camera is slow and its battery drains quickly.

Register for Lab report to get the latest reviews and top product tips straight to your inbox.

This newsletter may contain advertisements, offers or affiliate links. Subscribing to a newsletter indicates your consent to our Terms of use and Privacy Policy. You can unsubscribe from newsletters at any time.