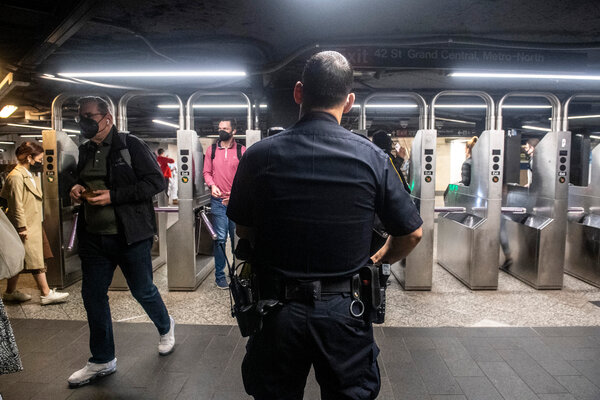 For Shahana Ghosh, a first-grade teacher at PS 24 in Sunset Park, just two blocks from the subway station where Tuesday’s shooting took place, the day started like any other.

After a morning meeting with the other teachers, her students sat down for class at 8:10 a.m., ready for reading and math lessons. Half an hour later, an announcement came over the public address system: the school was going to “shelter in place” – a type of confinement where classes continue as usual, but no one can enter or exit the building.

At around 9am, Ms Ghosh’s colleague, who was not at school on Tuesday, texted her explaining why: A shooting had taken place at the 36th Street subway station.

“It was very, very difficult today,” Ms Ghosh said. “It was unlike anything I’ve dealt with.”

Because the children in her class are so young, no announcement of the news was made so as not to scare them, and Ms Ghosh had to keep a calm face for the rest of the day. When her students started noticing that her phone was constantly beeping, she kept them busy by announcing a game time.

“I really try to stay the course and not show any of my fears,” Ms Ghosh said. “The kids were playing with Play-Doh at the end of the day and wanted to show me the ice cream they were making, and I was like, ‘I’m texting your mom and trying to make sure she can pick you up, but thanks!'”

Annie Tang, a fourth- and fifth-grade teacher at a school about a mile from the shooting, also shielded her students from the whole story after their school received a shelter-in-place order, telling her students that it was just an exercise.

“We were all freaked out,” she said. “We kept it as normal as possible.”

Although Ms. Tang was able to keep her students busy with art lessons and science projects, some of them noticed that something was wrong. Some wondered why they couldn’t go outside for recess on a sunny day and why a lockdown exercise would last for several hours.

At the end of the day, Ms. Tang warned her students that it might take them longer to get home and that their families, friends or other relatives might be there to pick them up. Immediately, one of his students asked him if there had been a shooting.

“I told the truth, but not the whole truth,” she said. “I said everyone was fine, no one died, because I didn’t want to freak out the students.”

“I specifically told my kids that I wanted their parents to tell them,” she added.

With all trains in the area closed after school ended, Ms. Tang ended up taking a ferry home and Ms. Ghosh asked her cousin to drive her.

Ms Ghosh, who was trying to unwind from the chaos of the day by cooking dinner, said she had started thinking about how she would tell her first-year students about the shooting. She’ll likely focus the conversation on expressing their feelings, she said, and explaining what to do if they get caught up in a situation like this.

“I think we’re going to have to have a conversation about who’s hurting others and why that’s happening,” Ms Ghosh said. “It’s a big question these kids ask themselves all the time: ‘Why did they do that?’ This is the hardest question of all, because we don’t have an answer.

Ms Tang, who said she planned to decompress with another teacher friend tonight, said she had no idea how she would start telling her students about the classroom shooting tomorrow – but she knows that his students will ask him questions. Tomorrow, she added, is supposed to be picture day.

“We’re supposed to look happy, and I don’t know how it’s going to turn out,” she said. “I imagine there will be students who will be absent, because it’s really scary.”

What happened on day 44 of the Russian invasion of Ukraine?