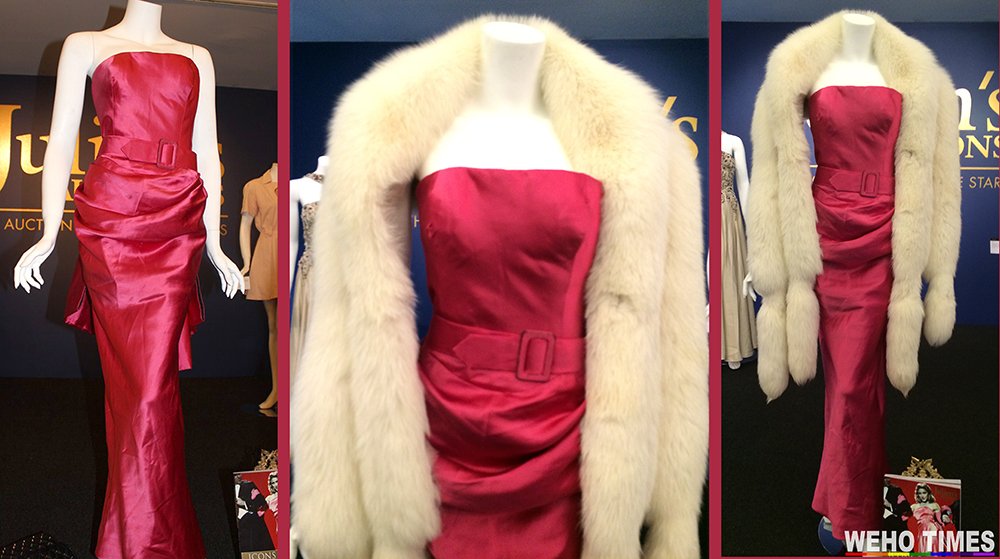 Madonna’s Material Girl dress and accessories, worn in her famous 1985 music video, sold for $287,500 today as part of Julien’s Auctions Music Icons collection. The auction house previously sold the dress alone for $73,125 in 2014.

Historic items consist of a pink satin dress with a strapless top and an oversized pink satin bow, a white fox fur stole by Edwards-Lowell of Beverly Hills, a pair of pink satin opera gloves and three rhinestone bracelets. The look was a nod to Marilyn Monroe’s performance of “Diamonds Are a Girl’s Best Friend” from the classic musical Gentlemen Prefer Blondes (Twentieth Century Fox, 1953). Julien’s Auctions lists the outfit as one of Madonna’s most iconic outfits.

Julien’s Auctions sold other Madonna items, including the original wedding dress she wore to marry actor Sean Penn in 1985, as well as the Desperately Seeking Susan jacket and other iconic outfits she wore in the film Evita and on The Who’s that Girl Tour. Personal items fetched more than $500,000 at an auction in Beverly Hills (the highest lot was the Desperately Seeking Susan jacket, which fetched $252,000).

Other items sold included her ivory satin halter dress worn in her 1990 “Vogue” music video, which sold for $179,200. Her hot pink “Material Girl” charmeuse silk headband with a bow sold for $28,125, 14 times its original estimate.

There was an open exhibit for fans and potential buyers to view the collection in person in 2014. This year the auction was held in New York and online.

“Take note Kim,” said @_rosey_malone_bridges on Julien’s Auctions Instagram page, calling out Kim Kardashian for wearing one of Marilyn Monroe’s original dresses to the last Met Gala. “The replica is ok 👍 even if you are a boring vessel of a human being.

“Notice she didn’t ruin the original and had her own made,” @championmia posted. “Brilliant idea!!!”

Legend has it that the iconic Material Dress was originally designed for the 1980 TV movie ‘Norma Jean’. It was rented to Palace Costume and Prop Co. for the singer to use in her music video. The dress was later used in “Blonde,” the 2001 TV movie exploring the life of Marilyn Monroe.

The Material Girl music video was shot January 10 and 11, 1985, at Ren-Mar Studios in Hollywood, California, and was directed by Mary Lambert who had previously directed the music videos for “Borderline” and “Like a Virgin”. She turns 38 this year.

After a two-year hiatus, the Open Forum returns to Davos at a crucial juncture in history