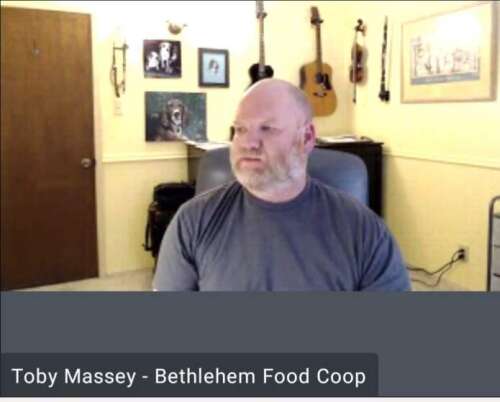 The third floor of the building is under construction, 57 apartments. The LLC wants to make the second floor identical to the third floor, but with two additional apartments. They also plan to have a lift to the roof, with a closed hall and a roof garden.

“The applicant is asking that the building be over 3.5 storeys high and be exempt from duty from the requirements,” said Schleigal.

Gretchen Rice showed a photograph of the artist rendering of the finished project, by Artefact inc. She said the LLC purchased the building in 2017. They spent 18 months “moving tenants to other areas of the building so the renovation could be done on the first and third floors.” On the east side is the Lehigh Valley Dual Language Charter School. The building has four wings. Some between the wings are open, some have roofs. These will become interior terraces, exterior space for the inhabitants.

Other on-site businesses include a health center, daycare, Lehigh Valley ACT, gym, photography studio, and corporate environment storage. There are also three vacant commercial spaces that are not yet renovated. Rice and her company worked with the city on parking and landscaping plans. The entrance to the apartment will be at the back of the building. There will be three elevators in the building, two for residents, one service elevator. The size of the apartments will include studios, one bedroom, one bedroom with a den, two bedrooms, two bedrooms with a den. There will be two townhouse style apartments, one with one bedroom, the other with two bedrooms. There will be 12-14 fret ceilings in each apartment, and the building will have historic design windows. The property is listed on the Register of National Historic Sites and as a State Historic Site.

Rice said the third floor was nearing completion. There have been “some supply chain issues with building materials, but should be able to open some in August.” The North Street parking lot will be refurbished and repainted. In addition, the Wood Street lot and certain spaces of the lot on which the building is located meet parking requirements. There are currently 263 berths, ten more will be added when the loading dock is removed. Rice said, â€œWith the exception of the areas that will be cut out for the terraces, the roof has been replaced. One of the four elevators will exit into the lobby on the fourth floor. There will be a 4000 square foot roof terrace with railings, a pergola, for tenants. The hall will be in the center. Lawyer Schleigal asked Rice, “Will you need a certificate of occupancy for the roof area?” She said yes.”

This building has three floors and a roof. A roof is never described as an additional storey. The city has considered this along with other developments and has given relief on the number of units. We would agree to tinker with the three plots, but not for the roof to be the fourth floor.

Board chairman William Fitzpatrick asked about the historical accuracy of the windows. Rice explained, â€œWe used old photographs of the building. The windows must be operational, but they have the appearance, number of panes and width of the originals. She added that there will be an exhibition in the hall on the first floor with relics from the Laros silk mill. The LLC worked with the Laros Foundation and the Industrial History Museum.

Scheigal said: â€œPlaintiff seeks an interpretation of the building as being over 3.5 floors (for the purpose of number of occupancies), determining a fourth floor would eliminate the need for relief. If the board rejected this, we would ask for 2,500 suareq foot relief. We want to claim the three plots, as one site. We believe this has been used by other properties in town.

Vice Chairman of the Board, James Schantz, asked, â€œWould you accept that the entire installation be sold as one piece in the future? “

Rice replied, â€œYes, it would all be combined into one deed and ceded to the condo association, so it couldn’t be sold in pieces.

The council voted to refuse the interpretation of four stories. They voted to approve the waiver requests, on condition that the three lots are sold with the main structure and cannot be separated for sale without outside approval.

The Zoning Hearing Board also approved the construction of an illuminated sign for the Taylor Court condominiums. Council approved construction of the freestanding sign on the condition that the sign is not located within the open sight triangle and that it complies with all city and state regulations.

press photo by lani goins David Delostantos spoke on behalf of the Taylor Court Condominium Association regarding a proposed sign for the complex on Linden Street.

The site of the future Bethlehem Cooperative Grocery Store at 240-250 E Broad Street.