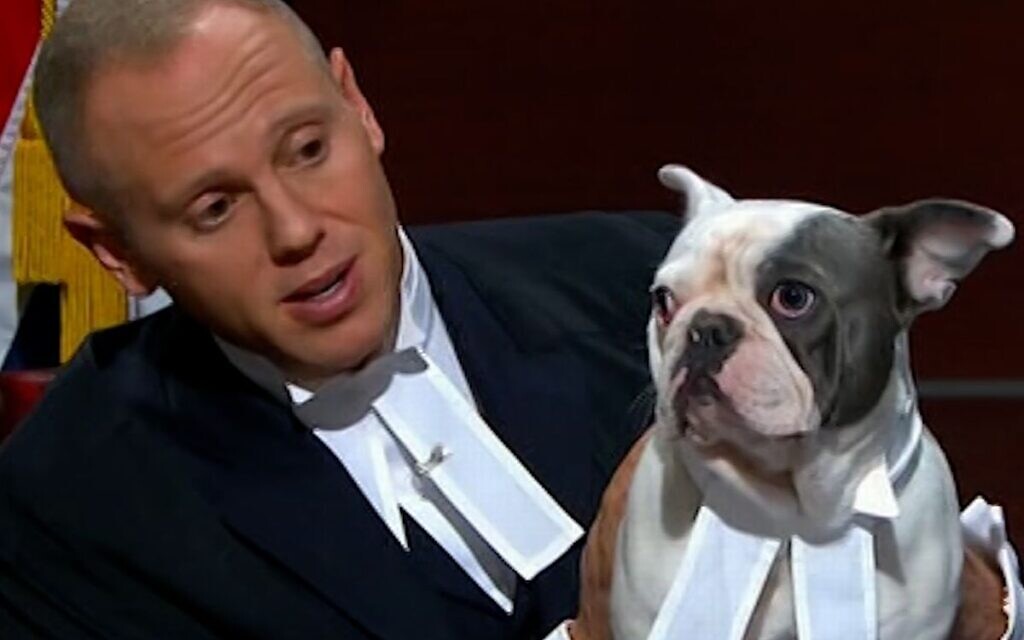 Aware of the law and all the affairs of pooches and Jews, all stand up for Rocco Rinder

Oy. It’s happening. No, not the judge playing Cher’s Believe for the umpteenth time, but Rosh Hashanah. It could be worse. Passover is when the family laughingly tries to provoke me into looking for the afikomen. I do it for fun and for lamb shank after the seder, but there’s only so much I can do with apples and honey. When you are the personal property of a legal eagle, staying immaculate is essential and honey puts me in a sticky situation. I know it’s a favorite ingredient of the Zen bakers who make these trendy organic dog biscuits, but in its natural form it’s sticky on paws. Yom Kippur is also sticky because of fasting. Although there is nothing in the Torah about abstinence from dogs, it is just wrong to eat in front of him and I know my place (at the end of his bed when I can). I’ve seen appalling dog behavior during major holidays, like when a terrier blew the shofar before it was blown. I understand it’s loud, but if it’s out of earshot, I’m respectful. With manners like mine, my list of atonements is short, though the judge thinks the prolific use of b**** is a sin. But what does an elegant French Bulldog call a bossy Bichon Frize? Suggestions on a New Year’s card please!

Photographers are rarely covered in kisses by their subjects, but for Emma Slade, it’s a perk of the job. Her subjects are dogs and the affectionate ones “prefer to cuddle or kiss me rather than pose,” says Emma, ​​who once had a sane job at a bank.

“For 16 years, it was long hours and extreme stress,” says Emma, ​​who only got a dog in January 2019 when Schlappohr bought her cockapoo on a whim. “It changed my outlook on life and I realized there was more to life than earning a good salary,” says Emma, ​​who left her job with no plans for the future. “I had no idea what I would do, but obviously I love dogs and loved photography as a hobby, so combine them and become a dog photographer!”

She also took classes, worked with mentors, learned the trade, and swapped tailored dresses and high heels for lying on the ground in muddy parks.

“I love it. I love meeting new dogs that have their own personality, just like their owners. It can be sad sometimes because I’ve photographed a few end-of-life dogs, but that old adage about working with animals is not true for me whether they are well behaved or puppies that are not I am not a patient person at all but when I photograph dogs I feel like I have all the patience in the world.

His canine rapport is evident in the stunning photos, but some effort is required. “Some dogs are given lots of treats during the session while the owner tries to get them to sit, stand still, or strike the pose that we are trying to achieve.

There are also owners who are very stressed and embarrassed if their dog does not do what they want. Emma’s solution is to get everyone to relax and, unsurprisingly, dogs tend to obey faster than their owners.

Transforming lives one dog at a time
It probably wouldn’t be surprising if the dogs trained by the Israel Guide Dog Center had an incredible transformative impact on the lives of Israelis who are blind or severely visually impaired. However, it may be more surprising to know the impact these amazing animals also have on IDF veterans suffering from the often crippling effect of PTSD due to everything they have been through for their country.

PTSD can have the most terrible impact on someone’s life. Even the sound of a ringing phone can shock them and the idea of ​​venturing outside becomes impossible. Interrupted sleep due to recurring nightmares can leave the victim too exhausted even to think properly.

But that all changes when paired with one of the Centre’s specially trained dogs.

Their calming influence, their ability to comfort in times of need, and their unconditional love and support are life-changing, allowing these brave veterans to take their rightful place in Israeli society.

The UK branch of the Israel Guide Dog Center is proud and privileged to bring such a partnership to the UK in November for its annual reception. This is the first time an IDF veteran has traveled to the UK with his assistance dog for such an occasion, and the association is delighted to welcome him.

For more information on the work of the Israel Guide Dog Center or the visit in November, please contact [email protected]

Being asked to do a survey after a hotel stay is not uncommon, but it is never offered to pets. If it was Angela Laws, the animals she cares for would get five stars. Community Manager at Trusted Housesitters, the company is the one you need when the cost of housekeepers and kennels gets daunting, but you still want to go on vacation. If the idea of ​​inviting a stranger into your home to care for your pets is more alarming than an excessive boarding bill, think again. Trusted Housesitters was founded by animal lovers and provides referrals to verified sitters to make you feel safe and in control. Register with them and you can scroll through a list of available animal lovers who like to live in different parts of the UK or the world for short or extended periods. Angela is one such babysitter who, along with her husband John, has cared for animals around the world.

Her love for the rooms she temporarily takes care of is best illustrated by the photos she has of each one, many of which have been taken over multiple times. Ziggy was only five months old when the Laws first cared for him. Jewish and living with his family in north London, Ziggy redesigned a pair of shoes and eyeglasses under Angela’s watch, but they were his – “And it was my fault for leaving them there where his teeth were.”

Teasel the cat welcomes Scottish Laws to his Barnes abode whenever his parents visit their other home in Massachusetts. “Teasel helps me when I work from home,” says Angela, who has cared for the obliging cat for nine years. Meanwhile in San Diego, Barclay eagerly awaits the Laws’ arrival as they stick to the regimental schedule tab set by its owner, a retired Navy commander. “We sometimes go ‘comfortable'”, admits Angela who gets

Barclay’s Mother’s Day Cards. “He goes for a drive every afternoon at 4:00 p.m. in his Barclay Mobile, a Mercedes Benz of course, to his favorite dog park and is waiting inside the car in the garage at 3:30 p.m. He can tell the time.

Stella was owned by Brian and Eileen Cohen in Los Angeles, but with her passing ties were not severed with the Lois.

“The first time we sat down for Brian and Eileen, they went to Israel for three weeks. Stella was very food oriented and John was about to split his sandwich when I said ‘NO!! you can’t give her that. She is Jewish! It was a ham sandwich.

Ask Angela about Bruno the donkey from Dubai, Casey from California (also Jewish) or Coco the Burmese from Sussex and she’ll regale you with anecdotes about them or their siblings or the inevitable new pet after losing the first. But the laws aren’t unique (well, kinda) as Trusted Housesitters has others like them and registration also gives the housekeeper use of a free 24/7 veterinary advice line when you are absent. Maybe you want to go now.

Make it a happy and healthy New Year for your pets by investing in a PetSafe® Drinkwell® Butterfly Pet Fountain (£28.99)

It encourages reluctant water drinkers because it sinks and cools so they stay hydrated and features carbon and foam filters to remove pet hair, debris and bad tastes from the water. PetSafe® also makes the Smart Feed Automatic Pet Feeder (£174.99), which allows owners to manage pets’ feeding times from anywhere using their smartphone. Connect the feeder to your home’s Wi-Fi and enjoy convenient meal planning and smartphone alerts that notify owners when a pet has been fed, when food is low or the feeder is empty .

A journey behind the camera | News, Sports, Jobs