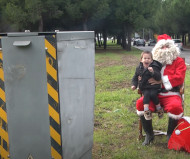 By Richard Diamond / Staff reports
Security guards across Europe and North America took time during the holidays to deactivate or eliminate the use of more than a dozen ATMs. A truck used as a radar platform in Edmonton, Canada, was damaged after failing to prevent an accident Wednesday. The Ford F150 pickup had the “Drive Safe” message on the side as it issued automated tickets on a snow and ice covered Whitemud Drive. The truck collided with an SUV at around 9 a.m.

In Cumbria, England, vigilantes on Christmas day shoot down pole mounted radar on the A596. In a video published on December 21, French comedian RÃ©mi Gaillard posted a video in which he dresses as Santa and posed with a child on his lap in front of a radar. Instead of taking a traffic photo, the device ended up taking a proper Christmas photo. Gaillard also placed a giant wrapped gift box on radar, thwarting the device’s ability to issue banknotes until police were dispatched to the scene so that banknote generation could resume.

Les Vigilantes de Saint-Beauzire, France, celebrated the New Year by set the radar on fire on the RD588. Around the same time, the RD902 radar at Polignac was blinded with black spray paint. The bright green spray paint was applied to radar on the A57 in Toulon Thursday. Likewise, in Saint-Jean-du-Bois, vigilantes sprayed the radar on the RD23 with green paint. The radar installed Tuesday on the RD943 in Chocques was blinded with spray paint a few hours after its commissioning. The gray paint was used against radar in Arrageois on Monday, December 27. Yellow was the color chosen for blind the camera on the RD951 in Saint-Julien-l’Ars. The day of Christmas, the fire damaged the radar on the RD884 near PÃ©ron.

In Lucca, Italy, vigilantes wasted no time on December 30 before using black spray paint to blind the radar that had been installed a few hours earlier in the day on Viale San Concordio. In Bitonto, once again the opponents of automated ticketing took action by reducing the radar on Via Domenico Ricapito Wednesday. Radar on SP6 in Sgonico disappeared on Christmas Eve, only to be discovered five days later – it was a mile and a half behind a bush in Dirty. In Cagliari, the spray of red paint blinded radars on the SS131.