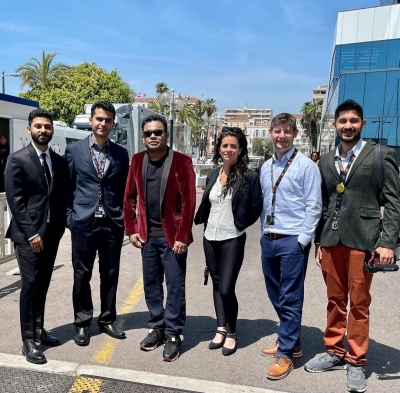 Taking to Instagram, the ‘Mozart of Madras’ shared a photo of people wearing AR/VR headsets watching the film while seated in their immersive VR chairs designed by Los Angeles-based company Positron. The chairs incorporate motion, scent, immersive sound and haptics, or technology that creates the experience of touch by applying forces, vibrations or motions to the user.

Reporting on the 36-minute film shot in Rome, “Variety” said it was billed as “a cinematic sensory experience incorporating virtual reality, with movement, music and scents integrated into the narrative.”

It follows heiress and musician Juliet Merdinian (played by Nora Arnezeder, previously seen in ‘Army of the Dead’), who, 20 years after she was orphaned, “searches for the men who changed her fate with a memory powerful – that of their smell.” The cast of the film also includes Guy Burnet (“Oppenheimer”), Munirih Grace (“Pure”) and Mariam Zohrabyan.

Rahman developed the story from an original idea by his wife Saira. “They share a love for perfume and wanted to use perfume as a narrative device in immersive cinema,” ‘Variety’ reported. Rahman directed from a screenplay by Gurachi Phoenix, in addition to composing the score.

“The Musk”, according to ‘Variety’, features interdisciplinary expertise from around the world. “It was shot on 14 different cameras capturing super-resolution quality video. Post-produced in a stereoscopic 360 VR workflow at higher resolution and frame rate, ‘The Musk’ was completed by 10 VFX houses around the world with almost a petabyte of data.

A petabyte is equivalent to a quadrillion bytes or a million gigabytes. (IANS)