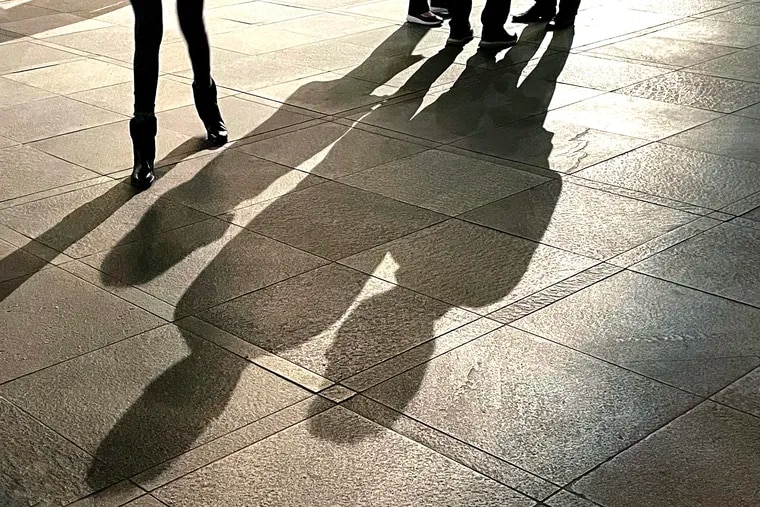 It’s the end of March, when madness makes a lot of memories. But this year in particular, you can’t help but read or watch the many reruns of what is considered the greatest college buzzer beater of all time.

On March 28, 1992, here in Philadelphia during the NCAA Eastern Regionals, Duke’s Christian Laettner took an inbounds pass from teammate Grant Hill all the way down the field. He once dribbled, faked and took a turnover jumper hitting what is now known as “The Shot”. Ultimately, He dispatched the Blue Devils to claim their second straight national championship.

I re-photographed the site where it happened. Today it is a water retention pond in the middle of parking lot G at the Wells Fargo Center. Then it was the basketball court in the long-gone Spectrum at the NCAA Sweet 16 and Elite 8 East Regional Tournament.

This year, with the Eastern Region just wrapped up here at the Wells Fargo Center and the University of North Carolina advancing to the Final Four (ending St. Peter’s historic run as the first 15th seed to reach the Elite Eight), I spoke with photographer Chuck Liddy, and today, exactly three decades to the day, here’s the story behind that day’s other “hit” – his iconic photo of the moment the ball left Laettner’s hands.

Liddy, now retired from the Raleigh News & Observer, was then working for The Herald Sun, the local newspaper in Duke University’s hometown of Durham, NC. He had covered head coach and basketball legend Mike Krzyzewski and the team for years (Coach K’s final game will be in New Orleans next weekend, heading to a 13th Final Four record).

Liddy’s goal has been blocked by officials in crucial games in previous years. “I got burned two years in a row, when Christian did the same thing.” Photographers call it “ref ass”.

Just two nights earlier, after the game with Seton Hall, several photographers were injured when security guards – who had been told to keep everyone off the pitch – inexplicably thought they were supposed to prevent photographers from taking pictures after the match. “The guards were almost neck and neck and when we started trying to take pictures they were grabbing people and yelling ‘NO PICTURE!’ it was crazy. He said a photographer, doing his job, was tackled by two guards as he tried to pass them, and another, “was choked when the security guy grabbed his camera strap photo and started dragging him around”.

At the photographers’ meeting before the final game, NCAA officials brought in the Spectrum’s security chief who apologized to everyone, and all security guards were ordered not to not touch or interfere with accredited photographers after the Duke-Kentucky game.

When the Blue Devils called a timeout after Kentucky took a 103-102 lead with 2.1 seconds left in overtime, Liddy wasn’t going to miss what happened next. “I knew where the ref was heading down the baseline, and I knew if I stayed where I was he would get past me.”

He decided he would get up from his seated position with the other photographers — including those from his top North Carolina competition logs — on the floor in the corner of the field.

He waited for the players to start returning to the field, moving next to the television camera under the Duke basket, which was against NCAA rules. AP photographer Charles Rex Arbogast did the same, standing over Liddy, who was then kneeling on the ground. The security guards weren’t there, but an usher started yelling at them, but they didn’t move saying, “It’s over in a second”, and the usher just stopped bothering them. before the pass is launched.

Sometimes there’s that rare moment when something dramatic happens right in front of you. And it’s over in an instant. If you blinked, you missed it. But if you’re lucky, you held your camera and had the presence of mind to push the shutter, and it was set for the right exposure, and it was sharp. You’ve probably won a big news photo prize.

But almost all the time, as press photographers, we make decisions and choices: tight or loose; fast or slow; in front or behind; shallow or lots of depth of field; flash or light available.

Arbogast’s photo of the ball leaving Laettner’s fingertips, or fellow AP Amy Sancetta’s tight frame of Laettner’s face as he reacts to the “hit” are reproduced in newspapers, on websites , TV shows and shared on social media hundreds of times every March since.

Liddy decided he would shoot wide, “because I wanted to have the dashboard and the clock in the picture.” It was his decision to photograph him with a 20mm lens on his Nikon FM2 that made his image the iconic and historic image that is etched in the minds of basketball, Blue Devil (and Kentucky) fans. everywhere.

Liddy was using 35mm color negative film and rushed to a trailer that was outside the building, as there was no space inside the Spectrum press room. He had the color chemicals in a hot water bath, awaiting its arrival, and after processing took the negatives back to the press room as the trailer had no phone lines for transmission.

When he arrived, another photographer asked if he had the picture. “I have a frame, man. But I got it.

As he watched it on the 3-inch screen of his AP Leafax 35 handheld transmitter, many writers in the room – mostly from Kentucky – were saying that time had expired while the ball was still in Laettner’s hands.

Even on the small screen, you could clearly see the ball coming out of Laettner’s hands with 0.2 seconds left. Liddy said: “Suddenly a herd of writers gathered. The Kentucky crew was silenced and walked with slumped shoulders to their laptops.

Just then, the Spectrum’s phone lines stopped working. Liddy had 55 minutes to meet his deadline – and it took the transmitter at the time half an hour to send a single color image.

He had to make another decision. Asking another photographer to watch his gear, Liddy grabbed the 30-pound transmitter and went to get a taxi outside the arena. He offered to pay the others already in the taxi queue to get ahead of them. “I got in the cab and told the driver I would give him $20 more to get me to the hotel (downtown) in 10 minutes. He did – breaking a few traffic rules.

Liddy managed to make a 10 minute deadline. But the photo was not published in the morning paper. “An associate editor didn’t want to change the layout because he would have had to redo the page.”

They ran the photo – the next day – like a double truck (on two full pages). And requests for copies of the photo came from all over the county. A Duke Law graduate, working as a lawyer in Lexington, Ky., had a framed wall print behind his desk.

And, as former Inquirer sportswriter Frank Fitzpatrick reported, two weeks after the game, the referee who made the crucial call Laettner fired before the buzzer got a package from Krzyzewski. Inside was a signed photo of “The Shot”. He wrote: “I’m glad you understood.”

“It sounds exactly like something Coach K would do,” Liddy said.

Since 1998, a black-and-white photo has appeared every Monday in personal photographer Tom Gralish’s “Scene Through the Lens” photo column in The Inquirer’s local news section. Here are the most recent, in color: