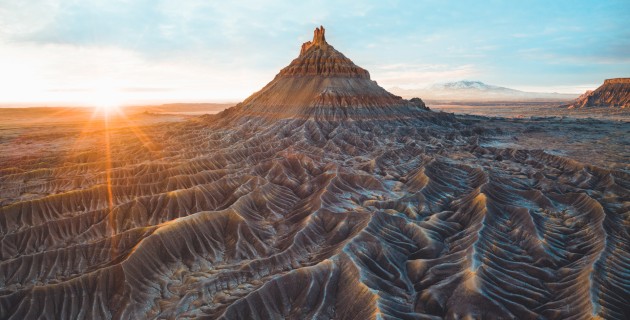 Co-hosted with drone manufacturer DJI, this year’s competition attracted nearly 30,000 submissions from professional photographers, videographers, aerial enthusiasts and content creators from 124 countries and regions. Over 100,000 USD (130,000 AUD) in cash and prizes were up for grabs.

For its seventh edition, the competition offered 10 categories, six for video (Nature, City, FPV, Travel, Sport and Showreel) and four for still images (Portrait, Architecture, Nature and Sport), with a grand prize for each .

This year’s grand prize winner in all four photo categories was Zhu Jianxin, who framed the otherworldly view of a frozen lake after heavy snow fell in the Taklamakan Desert in southwestern Xinjiang. , in northwest China.

With a simple change of perspective, several cracks on a frozen lake magically come together in a portrait of an elegant orchid.

Jianxin said, “I’m amazed how a drone changes my perspective and helps me capture the beauty of our world.”

Judge Stephen Foster commented on the work: “The real art of photography is capturing a photograph that people have to analyze for longer than a few seconds to see what the picture really shows.”

The grand prize winner in the video category went to Wenrui Ye, who explored urban villages in China from the perspective of a dancer. You can see the video here.

“I revisited Guangzhou, a city I’ve lived in for almost thirty years, and explored it with my interpretations, memories, and a whole new perspective. The dramatic contrast between the city and the villages seemed almost surreal, and I can’t help but think of the endless possibilities of Guangzhou in the future.

Yann Arthus-Bertrand, a member of the jury for this year’s competition, commented on the video as a “short film, well done, with a true story and excellent image technique and use of light”.

Along with the grand prizes, DJI and SkyPixel announced the winners of the new Mavic 3 Limited Award, for entries captured on DJI’s latest consumer drone, as well as first, second and third place in all 10 photo and video categories.

The Mavic 3 Limited award went to Tension Vision, for their image depicting the China Animation Museum in Xuzhao, China surrounded by fog.

You can see the other category winners, runners-up, and third-place runners-up below.

The grand prize winners in the photo and video category each received a DJI coupon worth 7,500 USD (10,000 AUD) to be used for any DJI product. Prizes in other prize categories included a DJI Mavic 3, DJI Air 2S Fly More Combo, DJI RS 2 Pro Combo, DJI Action 2 Dual-Screen Combo, and other DJI products.

You can see all of the contest submissions on the Skypixel website.