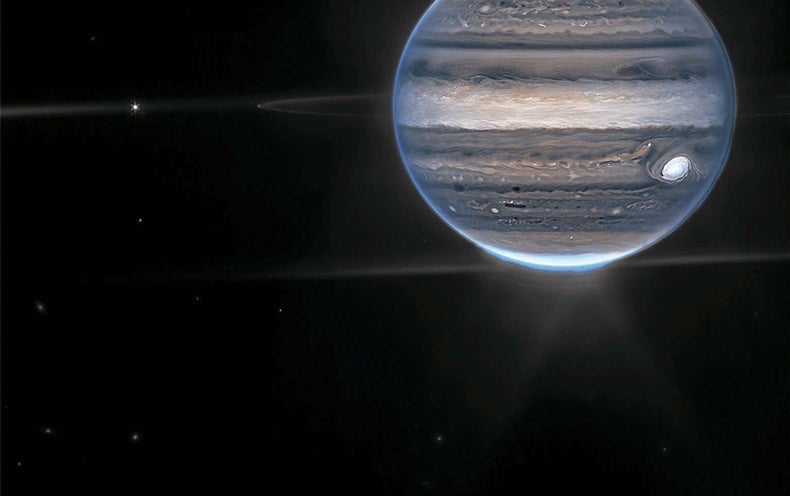 The rings of Jupiter, its moons Amalthea (light point on the left) and Adrastea (weak point at the left end of the rings), and even background galaxies are visible in this image from JWST’s NIRCam instrument. Whiter areas of the planet represent regions with more cloud cover, which reflects sunlight, especially Jupiter’s famous Great Red Spot; darker spots have fewer clouds. Perhaps the most stunning feature is the blue glow of the planet’s auroras at the north and south poles. These light shows occur when high-energy particles from the sun hit atoms in Jupiter’s atmosphere. Auroras are found on any planet with an atmosphere and a magnetic field, which directs particles from the sun towards the poles; besides Earth and Jupiter, telescopes have seen auroras on Saturn, Uranus and Neptune.

The phantom galaxy, M74, forms fascinating swirls in this photo combining observations from JWST and Hubble. Visible light data from Hubble shows starlight in this spiral, including older, redder stars at the galaxy’s glowing core and younger, bluer stars at its outskirts. Infrared light captured by JWST, however, highlights gas and dust threaded through the spiral arms, as well as a bright cluster of stars at the heart of the galaxy. Each telescope sees a different aspect of this cosmic wonder, and the combined image provides a more complete picture than ever before.

JWST has enabled this first-ever view of Neptune’s rings in infrared, revealing their delicate glow. The photo also shows seven of the planet’s moons, including its largest satellite, Triton, the bright blue dot to the upper left of Neptune. The moon’s frozen nitrogen surface reflects 70% of the sunlight it receives, causing it to glow powerfully in the infrared. Distant galaxies dot the background in this wide-field shot. In the inset, Neptune’s ring layers are clearly visible: two thin, bright ovals and two paler, spreading layers. Bright spots caused by ice clouds of methane in the planet’s atmosphere stain its lower half.