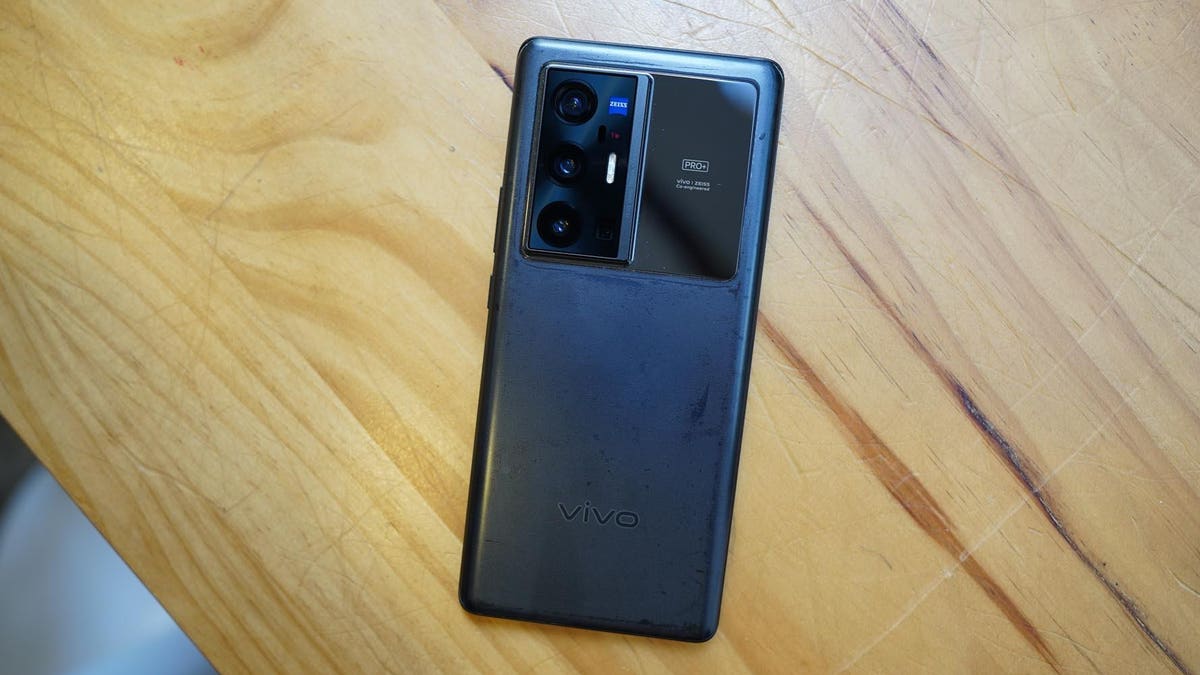 The champion of the low night photo

Almost five years ago, I first visited Vivo’s head office in Shenzhen. Back then, Chinese phone brands still had a reputation for making non-original phones that borrowed design cues from Apple. My visit that day didn’t change that perception much. I remember a Vivo employee showing me the company’s phones (as well as some Oppo devices) and they looked almost identical to the iPhone 6S.

But Chinese tech companies work endlessly and relentlessly (I have seen with my own eyes the infamous “996 system” where employees work 12 hours a day, six days a week), and this work ethic has enabled businesses to improve quickly. In the five years since that visit, Vivo’s smartphones have improved in leaps and bounds. They now feature original premium designs, and in the case of the company’s latest flagship phone, the X70 Pro Plus, it beats Apple instead of following it.

The Vivo X70 Pro Plus is the third in the company’s â€œgimbal camera seriesâ€ that started with the X50 of 2020 and the X60 of early 2021. I already thought that the top model of that last line (X60 Pro Plus) had arguably the best low night camera I’ve ever tested, and the X70 Pro Plus takes that “arguably” and makes it a conclusive victory.

The Vivo X70 Pro Plus is my favorite night camera – and its photos are generally slightly better than the same shots taken by the iPhone 13 Pro. Don’t just take my word for it, see these examples for yourself.

In the trio of samples above, Vivo’s colors look better, shots are a bit sharper as you zoom in, and dynamic range is better. Pay attention to the lights in the iPhone photo, they are slightly off. This is not the case in the photos of Vivo.

Of course, there’s more to a camera than just capturing night landscapes. The iPhone 13 Pro’s camera is even better in some areas like selfies and portraits. But overall, the cameras in the Vivo X70 Pro Plus can compete with Apple’s best and more than hold up.

Vivo has developed its own “brain” to process images

The magic of the X70 Pro Plus isn’t just in its excellent 50-megapixel camera using a large GN1 sensor – this sensor has actually been used by Vivo for over a year. The difference this time around is that the X70 Pro Plus runs on Vivo’s new proprietary V1 imaging chip.

This V1 chip manages the processing of the image signal, it is essentially the brain which records what the eyes (camera lens and sensor) see. And having its own dedicated chip gives phone brands more control over the entire image processing pipeline. According to Vivo, the V1 helps the phone reduce noise and produce better HDR. The above examples seem to corroborate these claims.

Few phones have achieved this, because making your own chip (as opposed to just buying one from an established chipmaker like Qualcomm) costs a lot of time and money. Apple and Samsung, which have been tech giants for so long, are the two most notable phone makers to have their own chips. Huawei did it too, before US sanctions stopped it.

Apart from these three tech giants who are essentially national treasures in each of their home countries, Xiaomi and Vivo are the only other phone brands to have developed and marketed their own chips so far. (Google has also developed one, but it has yet to be released).

Considering the breathtaking nighttime photography prowess of the X70 Pro Plus, I think the V1 is a hit.

Display, processor, and other hardware bits.

The Vivo X70 Pro Plus has a 6.7-inch, 120Hz, WQHD + OLED display, which is basically as good as the best displays on the market. The animations are smooth and the screen brightness becomes bright enough for outdoor use. The bezels are minimal, and the perforated cutout housing the selfie camera is much less intrusive than the notch on Apple’s iPhone.

The device I am testing runs on the Snapdragon 888+, with 12 GB of RAM. These are flagship components, but not new to Vivo – the company has been using the latest Qualcomm SoC for years. New to the X70 Pro Plus is the addition of IP68 water and dust resistance, as well as wireless charging up to speeds of 50 W. These were the last two â€œflagship flowersâ€. that Vivo did not offer before.

Now with these last elements, I can say that the X70 Pro Plus is a high-end flagship in the class of Samsung’s S21 Ultra, Apple’s iPhone 13 Pro Max, and Xiaomi’s Mi 11 Ultra.

Of course, no phone is perfect, and I have some nit-picking with the device. The first is that Vivo has moved away from the leather back used in the last two X-series devices. Instead, we find this glass with that soft, â€œcrystallizedâ€ texture that I’m not a fan of. It sticks to my fingers, the same way our phone screens sometimes stick after touching our faces for a phone call. I much prefer the leather back.

The good news is that Vivo includes a leather case with the packaging, but I still prefer the integrated leather finish of the latest model.

The second complaint is that the phone’s video recording currently has a little problem. At the start of each video, in the first second, there is a fraction of a second frame freeze. It’s pretty easy to cut in Vivo’s own video editor built into the photo gallery app, but it still shouldn’t be there. I think Vivo can fix this issue through software updates down the line.

There is a 4,500mAh battery inside that can power the phone for around 12-13 hours of heavy use. Charging can be done with the included quick charge brick or wirelessly with any Qi charger.

We have to get back to the cameras because they work so well. The X70 Pro’s four-camera system features a 50-megapixel GN1 lens with an image sensor size of 1 / 1.31 “and an f / 1.6 aperture. These numbers are among the best in the world. smartphone industry and, together with the V1 chip, they capture crisp and vibrant images, especially at night.

The ultra-wide camera is a 48-megapixel shooter that produces 12-megapixel shots with pixels. It has a wide field of view, but minimal distortion or loss of detail.

For zooming, the X70 Pro Plus uses two lenses: a short 12-megapixel telephoto lens for 2x zoom and an 8-megapixel Periscope lens for 5x optical zoom.

While I once spoiled that the X70 Pro Plus’s main camera currently captures the best stills of any phone I’ve tested, the other lenses have some competition. Vivo’s ultra-wide is good, but I think Oppo’s Find X3 Pro can be considered a slightly sharper ultra-wide shooter. Vivo’s zoom lenses are solid, capable of producing crisp images up to around 15x, but Samsung’s Galaxy S21 Ultra with a 10x optical zoom lens is a bit ahead.

But the main camera is the most important, so based on that I would give the X70 Pro Plus the best overall camera system title right now.

Video performance is good. That gimbal camera system is still around and it works to a point, but ultimately it will be the excellent EIS (Electronic Image Stabilization) that produces smooth shots.

In fact, when I shoot videos running with the X70 Pro Plus and the iPhone 13 Pro, Vivo’s stabilization is a bit better as well – it’s very impressive because the iPhone is the king of it. video recording on smartphones for a decade.

I’d still say the iPhone 13 Pro is the best video camera phone overall thanks to its revolutionary ‘cinematic mode’ and lag-free experience (remember, the X70 Pro Plus has that lag by a fraction. seconds at the start of each video). But this is a major breakthrough in videography for a Vivo device.

From following Apple to beating Apple

Vivo has been making beautiful phones with great hardware for a few years now. I really liked the dual screen design of the Vivo Nex 2, for example. But before that, Vivo phones always had software quirks and camera flaws that kept phones from being ranked at the top of any year-end list.

This changes for Vivo from 2021. The X60 Pro was already very polished and accomplished, and the X70 Pro Plus takes it up a notch.

It’s a little hard to believe that Vivo smartphones have moved from what are essentially iPhone clones to a distinct design language and outperform the iPhone in some key areas of mobile photography / videography.

The X70 Pro Plus is already on sale in China and will soon be in India, Southeast Asia and Europe. Pricing for European regions has yet to be announced, but in China and India it costs around the equivalent of $ 1,000. It’s a fair price for a phone that can match the absolute best deal from Apple, Samsung, Huawei, and Xiaomi.

Perhaps the biggest praise I can give the Vivo X70 Pro Plus is that I’m about to go on vacation for the first time in almost two years, and I’ll be bringing the X70 Pro Plus with me for photography. .