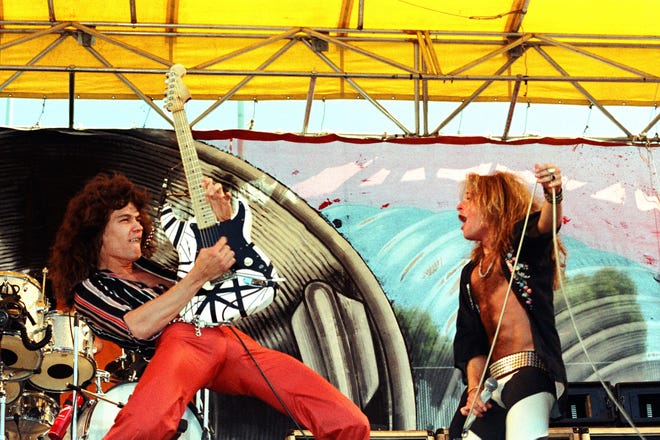 Richard McCaffrey of Providence has documented much of the golden age of rock throughout his career in music photography, from the rise of punk in the 1970s to the grunge era in the 90s. His work has been featured in publications such as The Point and Providence Phoenix and his current freelance affiliation with Getty Images.

The 70-page book features an A-Z compendium of artists and groups from McCaffrey’s collection, along with photos and descriptions of where the photographs were taken. Robert Blunt, who developed and designed the book, came up with the idea after becoming an uncle and told McCaffrey about it at Patrick’s Pub in Providence in 2019.

“My sister had her first child, my niece, and they got these primer gifts and all these different kinds of children’s books,” says Blunt. He wanted his niece to associate the letter H with the group Heart, the letter I with Iggy Pop, etc. He asked McCaffrey if he had artist photos for each letter of the alphabet.

“I wanted her to be the coolest kid in kindergarten,” Blunt says.

A few days later, McCaffrey came back to him and told him that he had an Artist Alphabet in his collection. Blunt played with the photos and developed a mockup of the concept.

“When I showed it to him, we both agreed that it might actually be a thing, so we worked on it for a while,” Blunt said. “Then the pandemic hit, and we were almost ready to go but we couldn’t. I’m kinda thankful that we couldn’t because we had to tinker with it a lot more, tweak it a lot more and well – give it a lot.

You’d think sorting through decades of photos of legends like Blondie’s Debbie Harry, Tom Waits, BB King, Led Zeppelin, The Clash, and The Go-Gos, among others, would be a daunting task, but McCaffrey has already taken it upon himself. is busy with it when he created his website, richardmccaffrey.net, where the book will be available for sale. It has such a large collection that there might even be another book coming in the future.

“I picked the best photos from that era for my website years ago, and I still have photos from 1995 to now that I haven’t really put on my website or anything.” , says McCaffrey. “… I looked at five photos of David Bowie on the website and 10 of Linda Ronstadt and quickly chose what I thought would work best. We spent a lot of hours on this book just tweaking the pictures and stuff.

“Another thing that we’ve also tried to do as much as possible is that white men are overrepresented in rock’n’roll, so we tried to choose as many different artists as possible,” Blunt adds.

“Richard’s Rock & Roll Alphabet” is unique in its dual purpose: to help kids learn their ABC’s and educate people about rock’s greatest artists. It also highlights McCaffrey’s extensive work, while also mentioning the locations where his photos were taken.

“It’s a traditional coffee table book besides being a children’s alphabet book or an adult alphabet book, but it just shows all the famous artists from that era that I have,” McCaffrey says.

“We showcase artists I’ve never heard of before, artists like UFO and Oingo Boingo,” Blunt adds. “We’ve done all the research on them, so hopefully the reader learns something about an artist or band they didn’t know before.

“… Every place Richard turned, he could afford to take a photo of the entrance. Teaching people places like Mabuhay Gardens in San Francisco, Longbranch in Berkeley, and the Berkeley Community Theater broadens their knowledge.”

The book, $ 35, will have a limited edition of 199 copies which will be numbered and signed by McCaffrey and Blunt. There is also a Spotify playlist curated by Blunt that has a song from each of the artists and bands featured in the book. To purchase a book or for more information, visit https://richardmccaffrey.net/book-release/