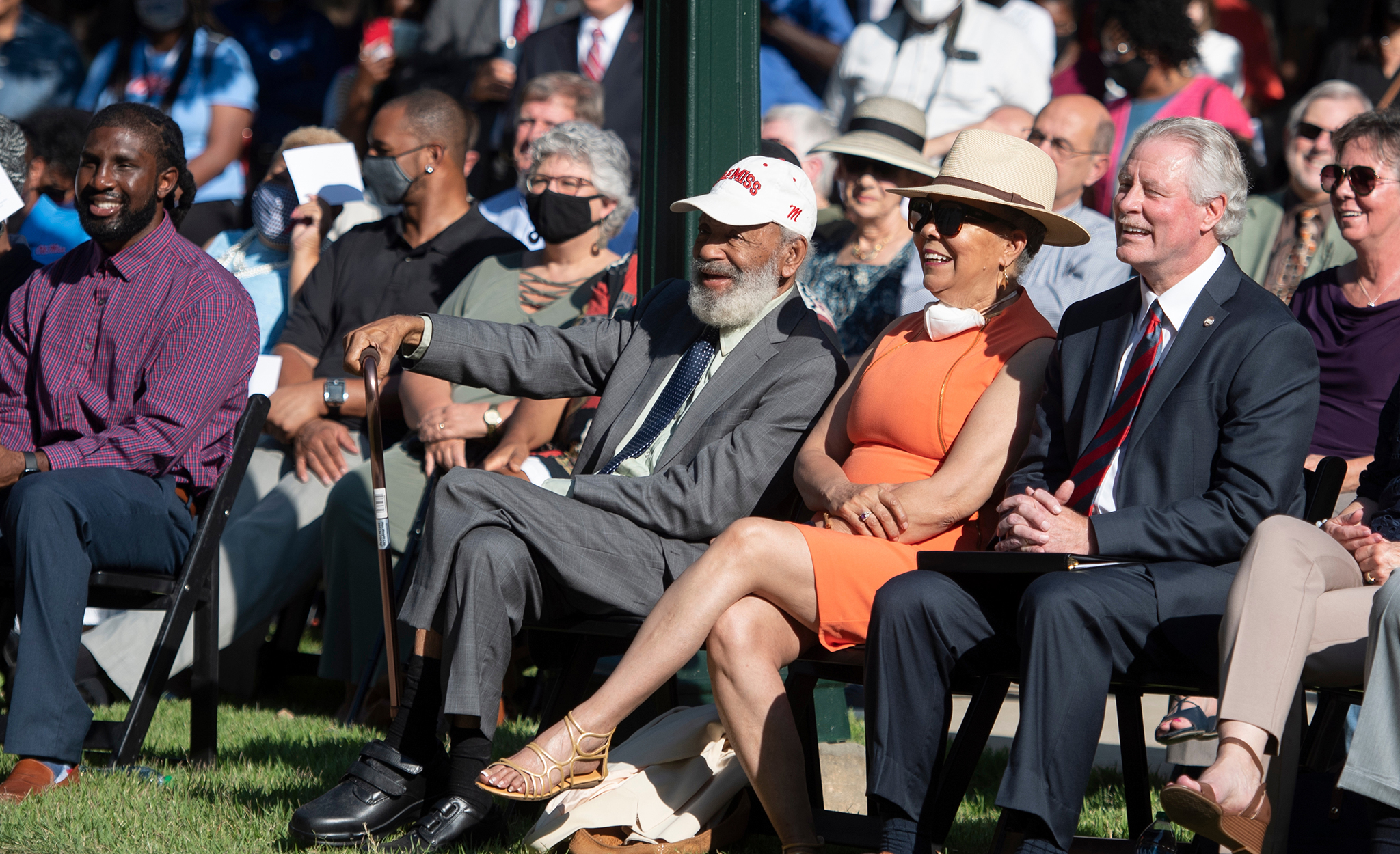 James Meredith (center) attends a ceremony to celebrate the naming of the Martingale-Cole Student Services Center in honor of Don Cole, a former student activist who became a beloved Ole Miss teacher and administrator of the campus, September 10, 2021. Photo by Logan Kirkland/Ole Miss Digital Imaging Services

OXFORD, Mississippi — On October 1, 1962, James Meredith became the first African American to enroll at the University of Mississippi. The events surrounding the integration were among the most significant in the history of the institution, and this year marks 60 years since Meredith became one of the heroic figures of the American civil rights movement.

With the theme “Mission Continues: Building on Legacy,” the university’s commemoration spans more than a year. A series of events, round tables, conferences, exhibitions and other activities are planned for the week of September 26, culminating with the integration anniversary on October 1.

Additionally, other activities and events will take place throughout the 2022-23 academic year.

“Honoring the anniversary of integration reminds us of our fundamental commitment as a community of scholars to educating the next generation of citizens,” said Chancellor Glenn Boyce. “Sixty years later, we continue to be inspired by the courage and perseverance James Meredith showed in coming to our university and how each of us has the power to effect change for a better community, a better Mississippi and a better world.

“As an institution of higher education, we recognize and embrace the transformative role that education plays in advocating for and helping all members of our community to thrive.”

Starting this fall, activities and events are planned throughout the 2022-23 academic year. Some of the highlights include:

Most events are free and open to the public. To reserve your free ticket for the September 28 signing event, contact [email protected] or 662-915-7411.

James Meredith attends a class at Meek Hall on his first day as a UM student in October 1962. Photo courtesy of Special Collections, University of Mississippi Libraries

The university’s associated student body, black student union, and graduate student council are leading an effort called “Letters to Mr. Meredith” to allow members of the campus community to express their gratitude to Meredith and share thoughts and words of appreciation. Letters can be sent via this form. Letters will be accepted on a rolling basis, but are encouraged to be submitted by September 12.

Additionally, individuals are encouraged to submit how their college history has been shaped or impacted by Meredith’s courageous actions.

“James Meredith: Breaking the Barrier” is an illustrated collection of essays published to commemorate the 60th anniversary of Meredith’s historic 1962 enrollment in college.

Offering a unique combination of perspectives, 10 former college students, journalists, historians and eyewitnesses tell the story of Meredith’s turbulent but successful journey to becoming the state’s first African American to graduate from its flagship university. .

The 160-page paperback includes more than 50 photos and will be available for purchase for $15 at the campus bookstore, the Overby program on September 27, and the signing event on September 28.

A group of visiting students learn about James Meredith and his legacy at the university’s Civil Rights Monument. Photo by Robert Jordan/Ole Miss Digital Imaging Services

The university has created a walking tour that provides a guide to campus locations where key integration-related events have occurred. Additionally, the walking tour can be accessed electronically at https://map.olemiss.edu and by clicking “Tours”.

“The courageous actions of James Meredith in 1962 rank among the most deeply significant events in our university’s history, and it is truly an honor to work with the Merediths, the planning committee, and other campus stakeholders to commemorate the 60th anniversary,” Mead said. “I am especially grateful for the energy and commitment of the many members of the Planning Committee who have worked so diligently to elevate this historic time for our campus and our community.

“We want everyone to be part of this important time for our university.”

Throughout the 2022-23 academic year, the university will share stories about the many events and commemorations. For a full list of events and other integration anniversary details, including Meredith’s story, timeline, photo gallery, and video interviews, visit https://60years.olemiss.edu /.

Father and Son Plus One Illegal Mini Gun Factory