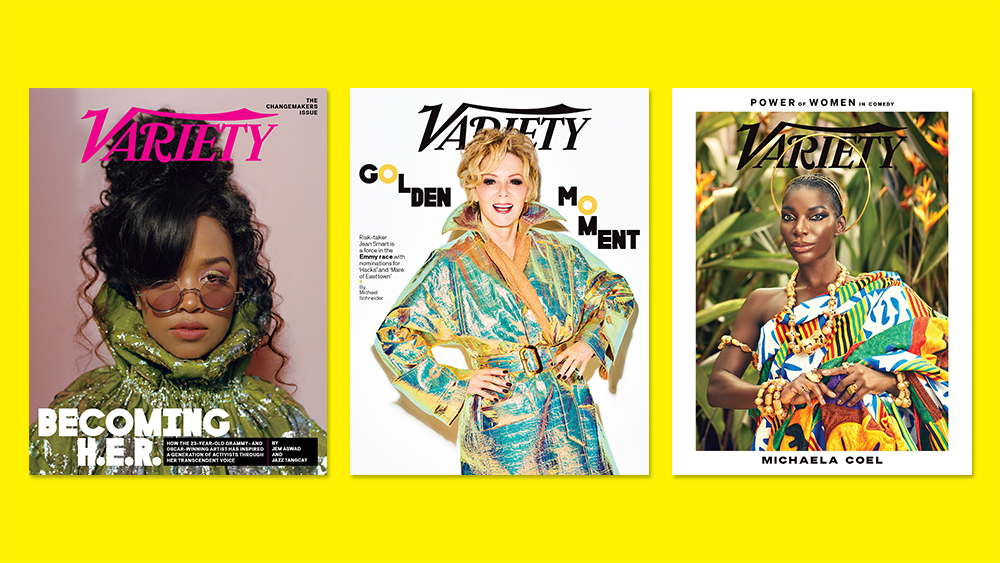 The awards, presented by the Los Angeles Press Club, recognize outstanding journalism from the region across print, digital, radio and broadcast platforms.

Editor-in-Chief Ramin Setoodeh and Deputy Music Editor Jem Aswad are both up for Journalist of the Year. Television critic Daniel D’Addario as well as chief film critic Owen Gleiberman and editor Chris Willman are all nominated for entertainment journalist of the year.

A feature on “I May Destroy You” creator Michaela Coel for Variety The “Power of Women” franchise has been nominated twice for Best Cover and Best Headshot. The image, by photographer Sophy Holland, cinematographer Jennifer Dorn and creative director Raul Aguila, was part of a dynamic series of photographs of several actresses. The 2021 iteration of POW focused the lens on women in comedy and featured Sofia Vergara, Mindy Kaling, Maya Rudolph, Kate McKinnon, and Julia Louis-Dreyfus with Coel.

Kate Aurthur’s Louis-Dreyfus “POW” profile was also recognized with a wink for features under 1,000 words. Read the full interview “Julia Louis-Dreyfus Says She Misses Selina Meyer As Much As You Do”, at the link.

This is the first nomination for Variety.com editor William Earl, who received the honor for “The Invisible Oscars: Consumers Widely Ignore This Year’s Best Picture Nominees.”

TV Awards Editor Michael Schneider has been credited for his comments on TV, calling on the Emmys to stop awarding all major streamers and pay tribute to long-running series such as “Grey’s Anatomy” or ” NCIS”. The nod was just one of six nominations for Schneider, which included interviews with gunsmiths and props in Hollywood after the “Rust” tragedy, a candid conversation with Michael Keaton and his Variety cover story on Jean Smart.

Additional Variety covers to receive Southern California journalism names include Aswad and Jazz Tangcay’s interview with musician HER, the 23-year-old EGOT-bound music prodigy. Her 2021 song “I Can’t Breathe” was not only a Grammy winner, but also an anthem for protesters and those seeking change. “Knowledge is power, music is power, and as long as I stand I will always fight for us. I will always fight for my people and fight for what is right. music, and that’s what storytelling does,” said the musician. Variety.

“How Lil Nas X Is Revolutionizing Hip-Hop As An Empowered Gay Star,” a cover by Setoodeh and Aswad, was also nominated for Personality Profile. The feature detailed how (after spending most of the pandemic ‘making music and crying’) the musician reappeared, ‘a totally different person’ – an outspoken, empowered gay man who is unafraid to express the truth in his art.

Elizabeth Wagmeister received three nominations, including one for her cover story about the former ‘Bachelor’ contestant: “Colton Underwood, the first gay ‘Bachelor’, confronts his controversial coming out.”

The work of Giacomo Gambineri, Haley Kluge and Aguila on the Variety The cover of “Children’s Hour” was recognized for its stunning presence with an illustration nomination.

Double-nominated Rebecca Rubin received honors for her entertainment feature “Confused about where to watch the latest blockbuster? You’re not alone” and “Summer blockbusters return to cinemas. Will the public do it? Both were incisive conversations about how we, the audience, consume the film. And with the ever-changing landscape at the box office, both stories show an innate understanding of the ups and downs of recent years in the film industry.

Variety The video team received a nomination for a regular newscast thanks to “The Take”, the current affairs series from Wagmeister and Clayton Davis. Other accolades include Angelique Jackson and Tangcay’s “Black Women of Awards Season” cover video, which featured in-depth conversation with Viola Davis and Stacey Abrams.

The Commission unveiled the 12 winners of the VET Excellence Awards