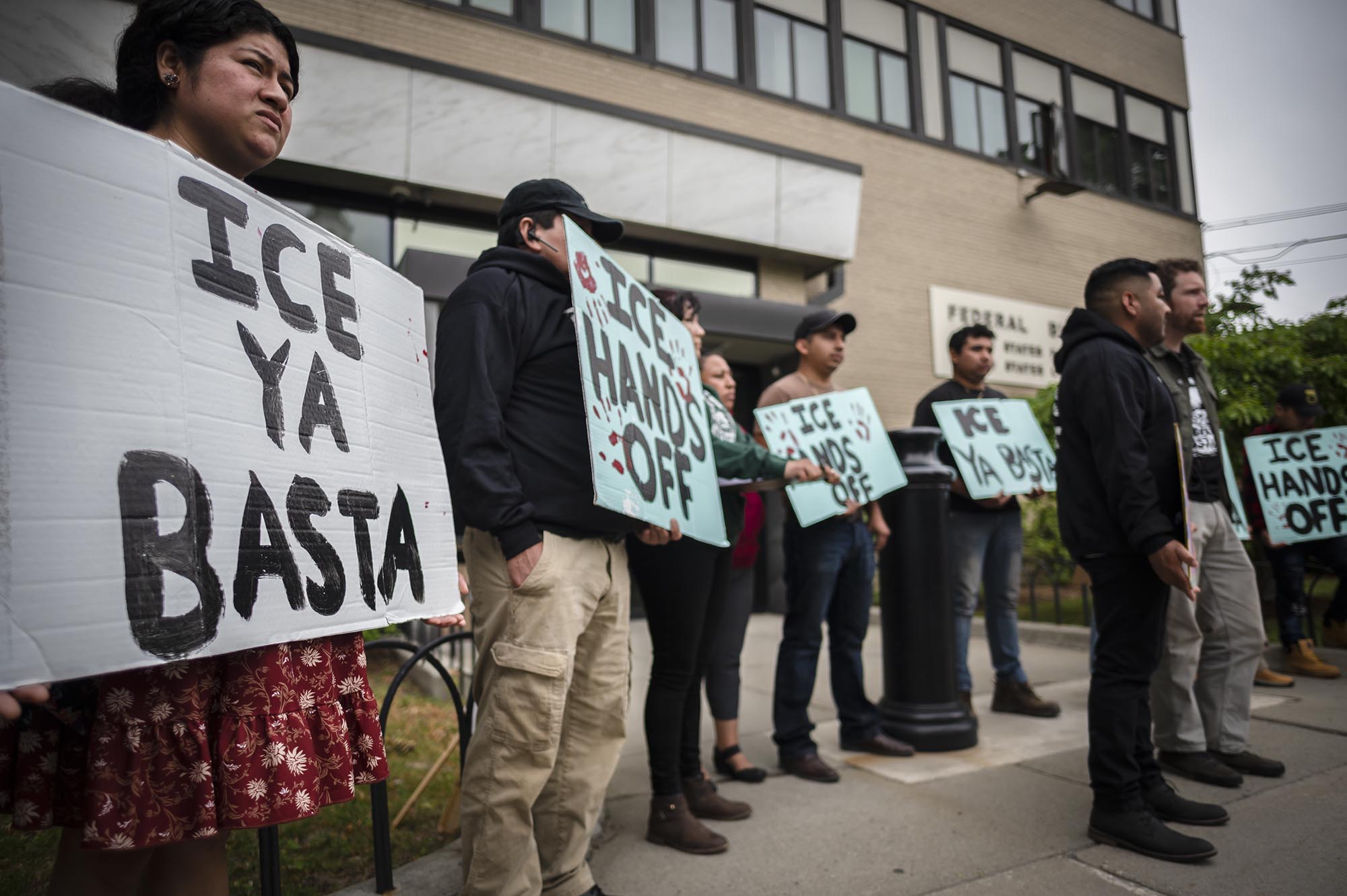 Ten Vermont farm workers, with the support of Migrant Justice and some elected officials, are asking US Immigration and Customs Enforcement to close their deportation cases.

A group of Migrant Justice activists held a press conference outside the Burlington Federal Building on Tuesday morning to announce their petition. About a dozen placards read “ICE ya basta” – a Spanish saying that roughly translates to “enough is enough” – and “ICE don’t touch anything”.

The 10 men named in the petition are originally from Mexico and have lived in Vermont for years, where they have worked primarily on dairy farms. They were each arrested in 2018 or 2019, often while running errands, such as groceries. Their cases were delayed during the Covid-19 pandemic, but now they are all scheduled for court hearings in the coming year.

Ismael Mendez-Lopez, 44, was arrested at a Walmart in 2019. He had gone to the Newport store with two of his colleagues. One of them stayed in the car while the others ran errands. While Mendez-Lopez was in the store, he said through a translator on Tuesday, he received a call from the colleague in the parking lot. Border Patrol agents had approached the car and promised “nothing bad would happen,” according to Mendez-Lopez.

They were arrested in the parking lot. Mendez-Lopez was released on $3,000 bail, according to a press release from Migrant Justice.

“Someone saw we were Hispanic, and they called Border Patrol,” Mendez-Lopez said.

Will Lambek, an organizer with Migrant Justice, said it was typical.

The arrests were “all based on racial profiling,” Lambek said Tuesday. “These are people who get pulled over by Border Patrol for driving while they were brown. It’s Border Patrol that sees a bunch of guys walk into a Western Union to wire money and approach them based on those factors alone.

Orleans County, where Mendez-Lopez was arrested, is 96% white, according to census data.

The petition asks for prosecutorial discretion. He cites a 2021 policy memo from Alejandro Mayorkas, Biden’s Homeland Security Secretary, who told law enforcement to use broad discretion in deciding which deportation cases to pursue. The memo asked ICE and other agencies to prioritize cases in which a non-citizen “poses a current threat to public safety.”

The memo also says the expulsion should not be used as retaliation for activism or against someone exercising their freedom of speech. He asks prosecutors to consider “a non-citizen’s exercise of the rights of his workplace or his tenant” as a mitigating factor in an eviction case.

The petition argues that the 10 men do not have characteristics that would make them a priority for eviction, and as members of Migrant Justice they have “significant backgrounds in exercising labor and tenant rights ” that ICE should take into account.

Several speakers at Tuesday’s event drew links between the current anti-retaliation policy and a lawsuit filed by Migrant Justice in 2018 against ICE, which alleged the agency targeted activists with surveillance, harassment and detention.

Since the trial, “attacks on our community have continued,” said Jose Ignacio, who is not a party to the petition but joined Tuesday’s event.

“Particularly in the northernmost part of the state, people are afraid to leave the farm,” Ignacio said through a translator.

Stay on top of all Vermont criminal justice news. Sign up here to receive a weekly email with all of VTDigger’s court and crime reports.