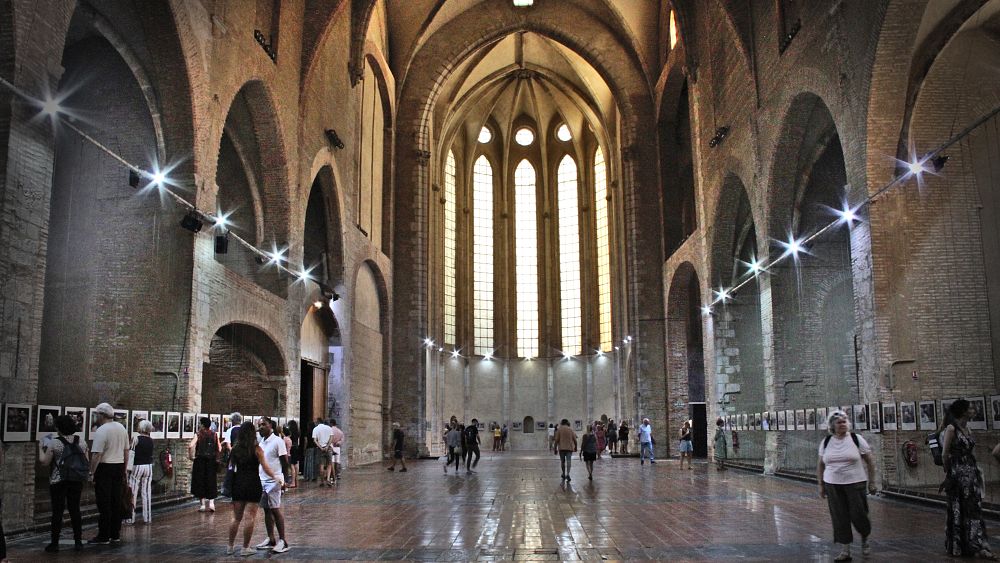 So many festivals have reopened to the public this year after the pandemic, giving thousands of people the chance to enjoy simple pleasures and perhaps a moment to escape everyday misfortunes. The International Photojournalism Festival, Visa for the imagedoes just that and presents a snapshot of the past that can create a lasting memory.

The event, held in the city of Perpignan, in the south of France, also offers visitors the opportunity to meet the people behind the images that sometimes go viral or make the news on any given day.

The war in Ukraine through the lens

Mission creep doesn’t just affect those fighting on the front lines. Even if we hear less about Ukraine in the media, in Perpignan, the conflict is omnipresent.

The director of the festival, Jean-François Leroy, recalls that “since 2014, the Committee for the Protection of Journalists has recorded the death of around twenty journalists in Ukraine”.

On the walls of the Gallieni Barracks downtown, visitors can observe and admire the incredible work of Mstyslav Chernov and Evgeniy Maloletka, two Ukrainian photographers who covered the Mariupol siege for The Associated Press.

The tragic story of a young child, Kirill, is told frame by frame over 18 months: his father carrying him in his arms, the doctors trying to save his life and his parents mourning his death.

Euronews Culture met Evgeniy Maloletka at the exit of the exhibition on Bucha. His photo is on all the posters of the festival.

“All platforms to show the reality on the ground are important. We appreciate that all the work we did in Mariupol is getting stronger but when we were there we didn’t understand it. It was really awful and disturbing. We We were trying to survive and show how it was, with a particular focus on medical and humanitarian personnel.”

Asked about his exfiltration from the city, he explains that it is becoming impossible to work: the hospital is surrounded, the neighboring building is occupied by Russian troops, and there are strikes every 20 minutes. His thoughts are with those who helped him and his colleague leave.

His work is nominated for the Visa d’Or News, one of the main prizes of the festival.

A window to the world

Ukraine is not the only target. For Leroy, the program should not be limited “to a single event, however important it may be”. A key theme this year is the environment, with eye-opening exhibits designed to resonate and stop visitors in their tracks.

Alain Ernoult went from war photojournalist to wildlife photographer. His work is devoted to endangered species and the 6th Extinction. His photos echo Brent Stirton’s work on bushmeat and disease outbreaks, a project he started two years before the pandemic. A timely reminder that photojournalists can be both witnesses and whistleblowers.

On the wall of the Dominican church, visitors are confronted with images of women dressed in beige prison uniforms. Ana María Arévalo Gose’s camera takes us to women’s prisons in Latin America and documents everyday life, boredom and promiscuity. Many of these women see their fundamental rights violated behind bars. Last year, Arévalo Gose won the Camille Lepage prize, named after the French journalist killed in the Central African Republic in 2014.

During its two-week duration, around 300,000 people visit the festival.

“I think photography is more striking than video, because it’s a frozen moment, it’s harder and more memorable,” says Eric, a visitor from Montpellier. His friend Maxime agrees. “Facial expression through photography, that’s what makes sense.”

In an increasingly precarious profession, with a growing number of freelancers and photographers working with adequate security or protection measures such as insurance, bulletproof vests or helmets, Visa pour l’image reminds interest and cost of taking photos to capture the world.

As the independent French photojournalist Jean-Claude Coutausse writes: “An image never tells the truth, but we can avoid making it lie.

Visa pour l’image takes place in Perpignan until September 11th. Part of the work is visible online on the site: https://www.visapourlimage.com/