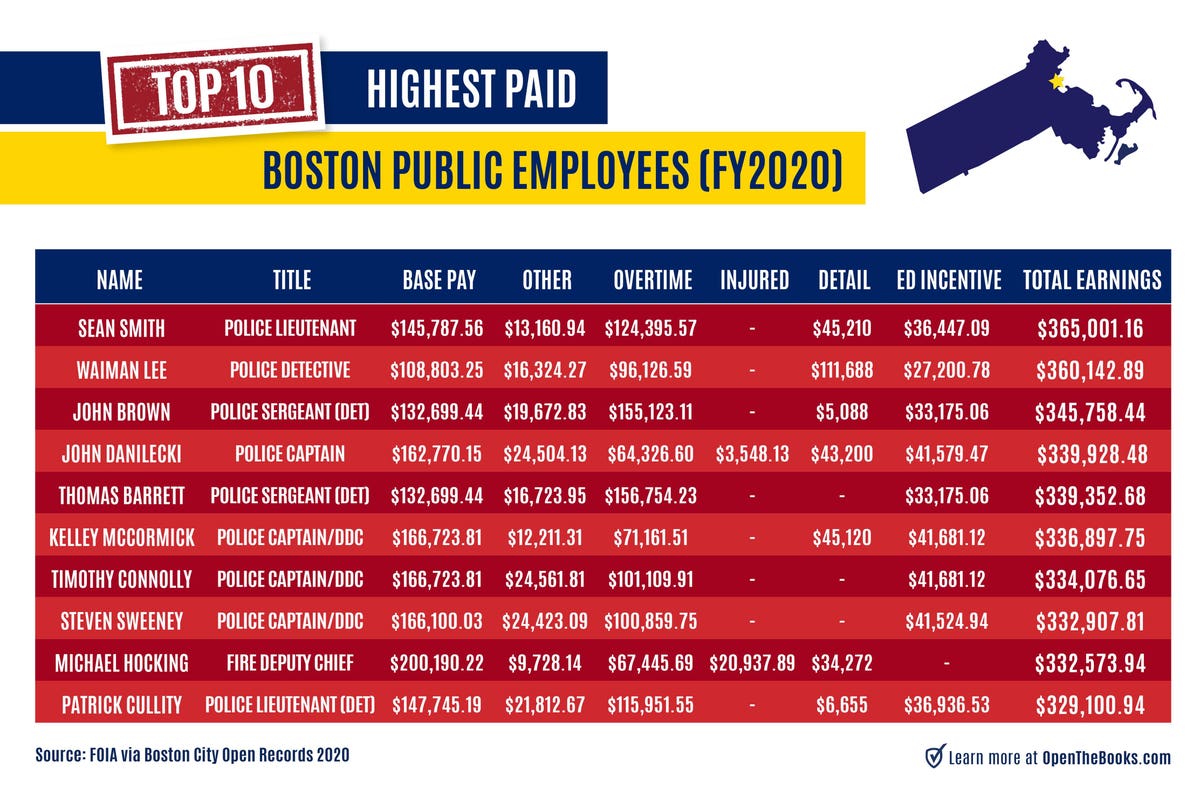 Boston ranks among the 30 most economically powerful cities in the world. It is a center for scientific research, a world leader in higher education and a pioneer in innovation.

However, none of this was enough to stop the city from ranking among the worst tax and spendthrift offenders in the country.

Recently City Council faced a $65 million budget hole last year but still voted for to augment expenditure of $119 million. They were probably counting on a bailout from the American taxpayer.

Then, in March, Congress bailed out Boston with $434 million from the American Rescue Act. But the actual amount of congressional assistance, according to a city spokesperson, was closer to $700 million.

It’s no wonder the city can “afford” to pay its employees so much.

Our OpenTheBooks.com auditors found that nearly 8,500 city employees earn more than $100,000 a year, costing taxpayers $1.2 billion. You can review the 2.1 million six-figure public employees across the country on our interactive map.

A spokesperson responded to our request for comment, justifying the six-figure overtime payments.

Walsh’s staff includes three photographers who have each earned between $74,000 and $85,000. Photographer salaries and benefits collectively cost taxpayers more than $300,000 a year.

Recently, President Joe Biden chose Walsh as the new Secretary of the US Department of Labor.

Public schools employ 5,121 teachers with an average salary of $93,193. With benefits, we estimate that each teacher costs taxpayers $120,000 each year.

Public schools did not resume full in-person learning until April 2021.

The city’s 3,142 police department employees cost taxpayers $416.3 million in cash compensation last year, an average of $132,500 per employee. Of the 500 highest-paid city workers, 365 worked for the police and earned at least $215,000 (all but six of the others worked in the fire department).

The city’s eight highest-earning employees were police officers — lieutenants, detectives, sergeants, and captains — earning between $332,907 and $365,001 in cash compensation, not including benefits and perks.

The Career Incentive Pay Program, dubbed The Quinn Bill, provided pay raises of 10 to 25 percent to police officers with advanced degrees in criminal justice. The raise added nearly $30 million in cash compensation to 1,384 officers, an average salary of $21,340 per officer.

Overtime pay added another $78 million to the payroll, which provided 2,521 employees with an average of $30,100 per person.

In 2020, the city saw a 5% drop in crime, but homicides and shootings rose about 50%, according to department statistics.

The department’s top salary went to two deputy chiefs, Michael Hocking and Michael Doherty, who brought in $332,573 and $309,925, respectively.

A spokesperson responded with full context regarding the department’s 2020 pay during a pandemic.

The department paid $3.4 million in overtime, an average of $9,621 per employee.

Deputy Commissioner Joseph Callahan cited the COVID-19 pandemic as an explanation for the department’s overtime pay: “2020 has been a very challenging year for the property management department due to the Covid pandemic,” said- he told Open the Books.

The city guaranteed $5.7 billion in bonds, pensions for public employees and health care for retirees. Each city resident owes $12,000 just to cover unfunded liabilities, according to data provided by the tax accountability organization Truth In Accounting (2019).

However, at the end of the day, Boston is a progressive utopia, so well-meaning tax hawks are going to have to shout a lot louder, or they won’t even have a voice at the table.

To note: The city only paid cash compensation, i.e. wages, overtime, other remuneration, etc. The costs of retirement benefits, health insurance, paid vacations and other benefits were not included – and, if they were included, we used an estimate of 30%. .

How much do creative jobs like artists and dancers earn